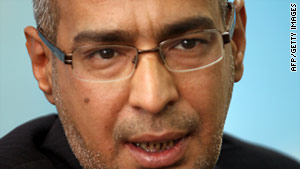 Al-Lami was riding in a car in eastern Baghdad on the canal highway at the time of the incident, officials said.

Iraq's Accountability and Justice Commission is charged with purging the government of mid- and senior-level members of ex-dictator Saddam Hussein's now-outlawed Baath Party.

Separately, two Iraqi soldiers were killed and 12 people were wounded when a roadside bomb explosion struck an Iraqi army patrol in the western outskirts of Baghdad on Thursday, interior ministry officials said.

In al-Ghadeer neighborhood in eastern Baghdad, gunmen shot dead Lt. Col. Khalid Mohammed, an official with Iraqi's interior ministry, while he was in a car, officials said.

Also, two mortar rounds struck the fortified Green, or International, Zone in Baghdad, but there were no reports of casualties, officials said. The zone is home to the Iraqi government and U.S. and British embassies.

In another incident, four mortar rounds landed on Baghdad international airport but there were no report of injuries, officials said.