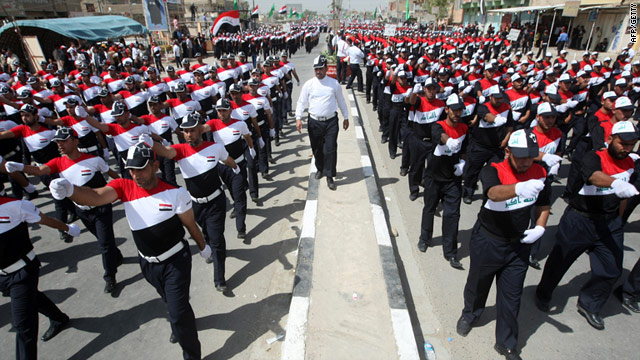 Tens of thousands marched in a military-style parade and chanted "Get out, occupier" in Sadr City on Thursday.
STORY HIGHLIGHTS
RELATED TOPICS

Baghdad (CNN) -- The clock is ticking for Iraq to ask U.S. troops to stay beyond an end of the year deadline to withdraw from the country.

It's a question that sparked a massive protest Thursday on the streets of Baghdad when tens of thousands dressed in the colors of the Iraqi flag marched in a military-style parade and chanted "Get out, occupier" in the Shiite slum of Sadr City.

The protest comes as Prime Minister Nuri al-Maliki meets with Iraq's political leadership to discuss the possibility of extending American troops beyond the January 1, 2012, withdrawal deadline.

Al-Maliki's government has requested a detailed assessment of the capabilities and limitations of Iraqi security forces, which they are then expected to balance against possible threats.

"If they should come and ask for something else, the timing does potentially impact feasibility," Maj. Gen. Jeffrey S. Buchanan, spokesman for U.S. Forces-Iraq, told CNN.

Depending on what, if anything, the Iraqi government asks of the U.S., Buchanan said it "becomes more difficult as we redeploy equipment, we transition bases and we start deploying people back home."

Al-Maliki has said the White House would need to know by August.

The decision lies with Washington on whether to grant any Iraqi request to extend troops, though the U.S. is widely expected to agree to some kind of limited extension of training personnel and equipment.

The prospect of U.S. troops staying beyond the end of the year sits uncomfortably with many Iraqis, who have routinely questioned American motives following the 2003 U.S.-led invasion that toppled Saddam Hussein.

It was a sentiment demonstrated Thursday when followers of radical anti-American cleric Muqtada al-Sadr took to the streets.

"Yes, it is a message to end to occupation," said Hazem al-Araji, a senior al-Sadr aide. "And there will be more parades to put more pressure on the occupiers and the Iraqi government to end the occupation in Iraq."

Al-Sadr threatened last month to end a 2007 cease-fire and "escalate armed resistance" of his militia, if U.S. troops remained beyond the deadline.

The debate also rages in other parts of the country, among taxi drivers and academics, among engineers and activists.

"Me, my relatives and my friends always talk about this issue and ask ourselves what will happen if the Americans leave Iraq in few months?" said Abu Muthana, 31.

Muthana, who drives a taxi in Baghdad, believes security in Iraq will deteriorate if U.S. troops leave.

"We still don't have a strong and united army that is able to protect Iraq and Iraqis or an independent army that is not affiliated with any political party or group," he said.

Demonstrations rocked Iraq in February when protesters, angered by high unemployment, poor basic services, corruption and lack of freedoms, took to the streets.

"All these issues lead to one question: What is the role of United States and its troops presence in Iraq?" al-Saadi said.

While al-Saadi believes U.S. troops should leave as scheduled, he said bilateral relations between the two countries were essential to serve both the "interests of Americans and the Iraqi people."

Al-Saadi, like many others, believes the U.S. withdrawal could create a security vacuum.

"Yes, there could be a security vacuum or political crisis after American troops leave Iraq. But there is a solution for every crisis," Al-Saadi said.

Sadrists will have a reaction if Iraq requests U.S. troops to stay beyond the deadline, said political analyst AbdulJabbar Ahmed.

"They will either escalate military operations against (U.S troops) or they will form an opposition bloc within the parliament for a no-confidence vote against the current government and change it," Ahmed said.

"There is concern among Iraqi people that Iraq will be on the edge of an abyss, if American forces really withdraw without finding alternative and positive solutions to solve the outstanding issues in the country."

For Ali Khamees, 45, there is no other option than for U.S. troops to leave as scheduled.

"They should have left Iraq after the fall of Saddam's regime in 2003. Wasn't it their goal from the beginning? Why did they decide to stay in Iraq all these years, " the engineer said.

"God knows what will happen, if they leave Iraq. But no matter what, we should not accept living in a country occupied by foreign forces."

But Hanna Edward, a leading Iraqi human rights activist, believes it may be too early to say goodbye to U.S. troops, pointing to Iraq's political instability.

The Iraqi government was formed in December, nine months after an inconclusive national election. It still does not have ministers of defense or interior, which oversee security forces.

In Sadr City, a few days before the protest, Abbass Muhssein, 71, was having breakfast when the first of 15 explosions rocked the city that day.

He said he blamed al Qaeda and remnants of Saddam Hussein's Sunni-controlled Baath Party for the attacks.

As he spoke, he was surrounded by bystanders who whispered in his ear: "Say the Americans are behind these attacks."

"No, not the Americans. Why should I lie?," Muhssein demanded to know from those standing around him. Many of them identified themselves as Sadrists.

He paused for a moment.

"The Iraqi army is not able to protect Iraq," he said. "We don't know what will happen after (U.S troops) leave Iraq."