Will gays be 'sacrificial lambs' in Arab Spring? 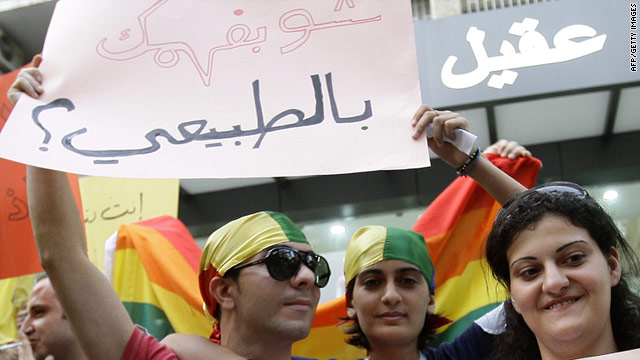 Protesters in Beirut, Lebanon, on International Day Against Homophobia 2010. Their banner reads "What do you know about being normal?"
STORY HIGHLIGHTS

(CNN) -- The uprisings bringing political change and demonstrations across much of the Arab world have given millions of people hope of greater freedom. But some gay people in the Middle East fear exactly the opposite.

Homosexuality is illegal -- enforced to varying degrees -- in most Arab countries.

A 2011 report by the International Lesbian and Gay Association reported that homosexuality is illegal in 76 countries worldwide and punishable by death in five, including Yemen, Saudi Arabia and Iran.

Despite the risks, there are those willing to speak out and campaign for gay rights across the Middle East.

Sami Hamwi, a 35-year-old journalist from Damascus, is the Syrian editor for the website Gay Middle East, but few friends or family know his true sexual orientation.

Hamwi said: "We have been trying in Gay Middle East to start a group to be able to help LGBT [Lesbian, Gay, Bisexual and Transgender] people in Syria. It is a work in progress."

I can think of a million things they can do to me if I was ever arrested.
--Sami Hamwi, Syria editor, Gay Middle East

However, he added: "I am very scared now. I can think of a million things they can do to me if I was ever arrested or investigated."

Hamwi wants to see reform in Syria, but doubts that any political change could significantly improve gay rights.

"Sheikhs still emphasize that death penalty is the Islamic punishment for gay men," he said.

"A more open society regarding sexuality needs years, if not decades, of work after Syrians get the freedom they aspire to have."

Haider Ala Hamoudi, an expert on Middle Eastern and Islamic law at the University of Pittsburgh School of Law, in the United States, says that while Islamic law is open to different interpretations, it is generally considered to condemn homosexuality.

"Not every Muslim would adhere to this view but traditionally Islamic law would regard homosexuality as illegal," he said.

"It seems commonly accepted that the foundational sacred sources (the Quran and the Sunnah) ban homosexuality," he added. "I do know there are Muslims who take exception to that, it's not black and white, but the dominant standing pretty clearly condemns homosexuality."

Some have a more positive view of the situation in Syria.

A Syrian woman who writes a blog called "A Gay Girl in Damascus" has gained international attention for her account of her father protecting her when security forces arrived at night to arrest her for "conspiring against the state."

The blog's author, Amina Abdallah, is a 35-year-old English teacher who says she returned to Syria last year after many years in the United States. In an email interview Abdallah said she believed that political change could improve gay rights.

She said: "A whole lot of long time changes are coming suddenly bubbling to the surface and views towards women, gay people and minorities are rapidly changing."

Abdallah said the reaction to her blog had been "almost entirely positive."

"What has really startled me has been the fact that I have received no criticism from Islamic sources," she said. "Instead, they've been entirely positive.

"It's sort of indicative of the sea change that's happened here; suddenly people are working together, regardless of their other views, to achieve a single goal: a free Syria.

Not everyone shares Abdallah's optimism.

Dan Littauer, the London-based editor of Gay Middle East, said: "Many gay activists are very scared that the reality of their oppression could get worse.

As long as religion has a big impact on governments around the Arab world, it will always be this way.
--Bertho Makso, Lebanese gay activist
RELATED TOPICS

"For example, in Egypt and Tunisia there was a lot of hope initially that there would be a more tolerant civil society. Now it seems that the impetus for change will be hijacked by conservative forces who will make the situation worse for gay people and other minorities.

"In Syria and other countries, there's a fear that gay people could be used as sacrificial lambs."

One gay American who recently left Syria, where he had been working for several years, said the unrest had made life more dangerous for gay people.

The man, who spoke to CNN on condition of anonymity, said: "It has caused even more skepticism and paranoia for the gay population -- just another reason to be harassed and checked."

Bertho Makso, owner of a gay-friendly travel company in Beirut, said homosexuals in Lebanon had more freedom than those elsewhere in the Middle East.

He said: "As long as religion has a big impact on governments around the Arab world, it will always be this way."

A 35-year-old gay activist in Dubai, United Arab Emirates, who also spoke to CNN on condition of anonymity, said: "Being gay in U.A.E. is keeping yourself discreet and hiding your inner self. One has to be very careful when in public to not draw any attention towards himself in order not to be harassed.

"The political changes occurring in the Middle East are on a political level only and have not resulted in any society changes. All the gay websites are blocked in U.A.E."