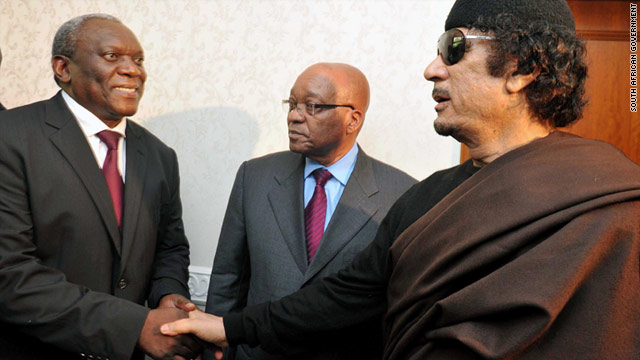 Tripoli, Libya (CNN) -- South African President Jacob Zuma did not discuss "exit strategies" with Moammar Gadhafi during talks about a possible African Union brokered cease-fire in Libya, according to a government spokesman.

Under the prospective accord, "everything would be on the table," said Libyan spokesman Musa Ibrahim, "including the place and position of Gadhafi."

But, Ibrahim said, the country's longtime ruler would not step down from power as a prerequisite for further dialogue concerning the prospective cease-fire.

He went on to criticize the North Atlantic Treaty Organization for acting outside "the limits of international law," blaming its bombing campaign for hundreds of civilian deaths and thousands of injuries.

Zuma had "lengthy discussions" with Gadhafi, his office said in a news release. "We call on all leaders in Libya to exercise decisive leadership to find a solution to the crisis in the country, and to put the interests of their country first," Zuma said in the release.

He also urged "NATO and other parties to respect the (African Union's) role in searching for a solution."

Meanwhile, an intensified NATO campaign has resulted in sizable defections from the Gadhafi camp, including eight generals who recently fled to Italy, the U.N. Under-Secretary-General B. Lynn Pascoe said in a written statement.

"He is increasingly isolated at home and abroad," Rasmussen said in a speech in Bulgaria. "Even those closest to him are departing, defecting or deserting."

Rasmussen said NATO has made "significant progress" in its Libya operation after conducting more than 3,300 strike sorties since March.

Opposition forces have also gained ground in the port city of Misrata, pushing westward toward the Libyan capital, the statement said. Government forces have regrouped in positions along the country's western Nafusa mountains, especially near the city of Yefran, where some 54,000 Libyans have fled to neighboring Tunisia, Pascoe added.

Close to 900,000 people have fled Libya since the recent conflict began back in February, the United Nations says.

And yet conflicting notions within the international body over how to manage the continuing conflict may reveal divisions.

"The secretary-general and his special envoy to Libya, Abdel-Elah al-Khatib, the African Union and other stakeholders have been making every effort to narrow these differences and to begin a credible negotiating process," Pascoe told the official U.N. news agency.

Meanwhile, a high-ranking NATO official told CNN that the organization has not "subcontracted any former military personnel to work in Libya."

"We don't have any boots on the ground," the official said.

Separately, Italy announced Tuesday that it is opening a consulate in the rebel-held eastern city of Benghazi.

CNN's Raja Razek and Richard Roth contributed to this report