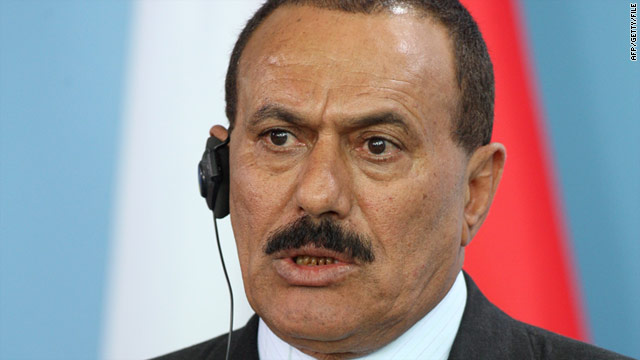 Yemeni President Ali Abdullah Saleh (pictured in 2008) was injured Friday in an attack on his presidential compound.
STORY HIGHLIGHTS

(CNN) -- Yemen's injured president "continues to improve" after he was hurt in a strike Friday at the mosque in the presidential compound in Sanaa, the Yemeni Embassy in Washington said Wednesday.

He was taken to a hospital in Saudi Arabia on Saturday for treatment. He is recovering from burns over 40% of his body and a collapsed lung, a U.S. government official has said.

An Arab diplomatic source with knowledge of Saleh's condition has said that one shrapnel wound was 7 centimeters (2.75 inches) deep.

What's next for Yemen?
RELATED TOPICS

The embassy said Saleh will return to Yemen from Saudi Arabia "to re-assume his duties soon after he recovers."

The strike hit Al-Nahdayn Mosque in the presidential compound during Friday prayers, and the assault is under investigation by law enforcement officials and forensic specialists.

An imam and several guards were killed, and other senior officials, including the prime minister, were wounded and taken to Saudi Arabia for treatment.

"The perpetrators of this bloody attack will be captured and prosecuted accordingly," the embassy's press statement said.

Fighting between government and tribal forces has been raging in Yemen's capital, Sanaa, where thousands of anti-government protesters have been pressuring Saleh to give up power since January.

The unrest also has spread to other parts of the country. On Tuesday, witnesses said tribal fighters took control of the city of Taiz in southwest Yemen.

Saleh is unpopular among many citizens but has been a key U.S. ally in the fighting against Islamic militants, particularly al Qaeda in the Arabian Peninsula.

For weeks a deal has been in the works for Saleh's departure but it has fallen through. The six-nation Gulf Cooperation Council, an alliance of Gulf Arab countries, has worked to broker the deal between the ruling party and the opposition.

One Yemeni government official, who has asked not to be named because he's not authorized to speak with the media, said communications between the ruling party and the opposition continues until Saleh is back.

"We hope he'll be back within 10 days," the official said.

As for the presidential palace strike, the source said it's too early to speculate on the details of the attack, which could have been caused by a rocket, a mortar shell or a bomb.

The official also spoke about Zinjibar, a town taken over by Islamic militants in Abyan province, saying government forces are in the process of retaking it.

"Clashes are still happening, but not door-to-door clashes," the official said. "Parts of the city are witnessing gun battles between the militants and security forces. It will take some time to root out the militants without causing heavy collateral damage."

The International Committee of the Red Cross and the Yemen Red Crescent are working to help the people of the country, and the ICRC issued a report on Wednesday that detailed the problems and the challenges of living in the restive land.

"Because of the fighting, it has often been difficult for medical personnel to reach certain parts" of Sanaa, said Jean-Nicolas Marti, the head of the ICRC delegation in Yemen. "Whenever there has been a moment of calm, dozens of people have been calling the ICRC, asking for help transferring the wounded to a hospital and recovering the bodies of the dead."

Marti said Sanaa is no longer the "lively city crowded with people and vehicles throughout the day, and filled with brightly lit shops open until late at night."

"There is now a high degree of tension in the streets," he said. People are living "day by day," stockpiling food and water, and staying in their houses. Men are sending women and children to relatives' homes in safer locations.

"People are in a constant state of alert in Sanaa and elsewhere in the country," Marti said.

"Blasts and gunshots were being heard every day until recently. Everyone was afraid that their home would be the next to be hit by a stray bullet or by something even more terrifying. Although an unusual calm has descended on the city, the nervousness and tension remain palpable."

Many employers have had to close and many jobs are threatened, and electricity has become a rare commodity throughout the country, the ICRC said.

Johannes Bruwer, the ICRC's head of the water and habitat department in Yemen, added that the country "is also in the grips of a long-term water shortage that leaves people feeling constantly anxious and concerned about whether they will have enough clean water at the end of each day."