France 24 files complaint over its own Syria story 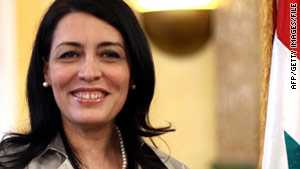 Paris (CNN) -- A French television network said Thursday it has filed a complaint with the Paris public prosecutor alleging identity theft and impersonation related to an interview it broadcast Tuesday with a woman the network identified as Ambassador Lamia Shakkour, Syria's ambassador to France.

During the telephone interview, the woman said she was resigning her post because of the ongoing violence in Syria. "I cannot support the cycle of extreme violence ... ignore the young men, women and children who have died," she said.

Shortly afterward, Shakkour denied to CNN affiliate BFM-TV that she had made any such statement, alleging in an on-camera interview that she had been impersonated.

In its statement Thursday, France 24 said it had invited Shakkour to participate in its debate program. "This invitation was made via the embassy, which, when contacted by telephone and e-mail, provided a telephone number said to be that of the ambassador, together with a photograph of the ambassador," the network said in a statement.

"It was using this number that the exchange took place, in which the declaration of the ambassador's resignation was made. That resignation was then confirmed in a wire published by the Reuters press agency, quoting the Syrian Embassy as its source."

But France 24 said it "has no option but to take Ms. Shakkour's denials seriously." It said it had commissioned comparative analyses that show the voice on France 24 differs from the voice that later issued the denial broadcast on BFM TV.

"France 24 has no doubt that Ambassador Shakkour and the Embassy of the Syrian Arab Republic in France, who were swift to report the manipulation of which they, like France 24, appear to have been the victims, will give their total support to this complaint and collaborate fully in the ensuing investigations," the network said.

In her interview Tuesday night with BFM, Shakkour had threatened to sue the network. "I am filing a complaint to the French tribunal and also to the international tribunal, and there will probably be some measures against France 24," she said.

Shakkour accused the network of following an agenda. "It's part of a campaign of misinformation by France 24, since the beginning of March, in which it gives voice only to dissidents of Syria and it falsifies videos."

In an interview with CNN carried out Tuesday night, after the two dueling telephone interviews but before the BFM on-camera interview, France 24's deputy editorial director, Renee Kaplan, called the situation "very puzzling."

"She has been a guest on our network before," said Kaplan, who added that station personnel reached Shakkour on a cell phone number that she had answered in the past. Kaplan added, "We are confident that the person we addressed on air was she. There is no other reason to believe that anyone else would have answered on the number."