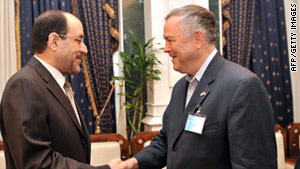 Baghdad (CNN) -- The U.S. Embassy in Iraq is distancing itself from statements made by Rep. Dana Rohrabacher that led to a government spokesman saying the congressman and his delegation are not welcome in the country.

Embassy spokesman David Ranz issued a statement Saturday saying "congressional visitors do not necessarily express the views of the U.S. administration or even a majority of Congress. The visitors this weekend made that clear in their remarks."

In widely reported statements after a meeting Friday with Prime Minister Nuri al-Maliki, the California Republican said he informed the Iraqi leader that his House committee is investigating the killing of Iranian exiles by Iraqi forces.

Rohrabacher, the chairman of the Oversight and Investigation Subcommittee of the House Foreign Affairs Committee, also told reporters during a news conference at the embassy in Baghdad that he suggested Iraq repay some of the cost of the war.

"Once Iraq becomes a very rich and prosperous country ... we would hope that some consideration be given to repaying the United States some of the mega-dollars that we have spent here in the last eight years," said Rohrabacher, according to the Agence France-Presse news agency.

CNN could not independently confirm the comments that were attributed to Rohrabacher. Multiple calls to his Washington and California offices were not immediately returned.

It was unclear whether the U.S. Embassy recorded the news conference. It did not make any video or audio recordings of Rohrabacher's statements available to the media.

Iraq has informed the embassy that the delegation is no longer welcome, Ali al-Dabbagh, Iraq's government spokesman, said Saturday.

"We have contacted the U.S. Embassy and they said the remarks of Congressman Dana Rohrabacher expressed his own opinion and not the official opinion of the United States," the spokesman said.

Al-Dabbagh said the relationship between Iraq and United States is still solid and would not be hurt by Rohrabacher's remarks.

Ranz declined to confirm the conversation, saying "we do not comment on private diplomatic exchanges."

Rohrabacher's comments come at a delicate time for al-Maliki, who is consulting with his government about whether to ask to extend U.S. troops beyond a January 1, 2012, deadline to withdraw.

Rohrabacher's trip was characterized partly as a fact-finding mission over clashes in April between Iraqi forces and Iranian exiles at Camp Ashraf that left 34 people dead and more than 200 wounded.

Telephone calls to the district and Washington offices of all five congressmen were either not answered or not immediately returned.

Rohrabacher has said his delegation was denied permission by al-Maliki to visit the camp, home to some 3,300 members of an Iranian guerilla group that fought against Iran's government and were given haven by Saddam Hussein's Sunni-majority government.

Iraq has ordered the camp be closed by the end of the year and wants the residents to leave the country. The residents are refusing to budge, and do not recognize Iraqi sovereignty over their camp. The result has been a number of deadly clashes in recent years.

The United States considers the group, known as the Mojahedin-e Khalq Organization, or MEK, to be a terrorist organization.

The Iranian dissidents say they will be killed if they are returned to Iran.

The U.S. has proposed a plan that would temporarily relocate the MEK within Iraq, farther from the border with Iran.

Under the plan, they would later be relocated to other countries. That would not include the United States, since U.S. law bars anyone associated with a terrorist organization from settling there.