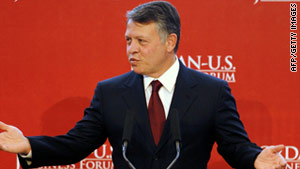 "Today, and on this occasion, we announce our reform vision for the Jordan of the future, in which democracy and popular participation take root as a consistent approach for the sake of building the Jordanian state, in which promoting justice is a purpose, tolerance is a mission and respect for human rights is the goal," Abdullah said.

As part of the announced reforms, Abdullah emphasized that the new law should "guarantee the fairness and transparency of the electoral process through a mechanism that will lead to a parliament with active political party representation; one that allows the formation of governments based on parliamentary majority and political party manifestos in the future."

The king also announced economic reforms, including changes to the country's tax system in order to "raise the level of competitiveness, enhance the atmosphere for investment, secure work opportunities for youth and maintain the state's active, observatory role in an open market economy."

It was not clear when the reforms would be implemented.

The address comes six months after protests broke out in the country. Most of them, unlike demonstrators in Arab countries that have seen uprisings, have not been seeking regime change but changes to the regime.

In February, Abdullah fired his prime minister and cabinet and instituted a number of economic measures and promises of political reform in an effort to appease those demands. But the protesters' list of demands grew longer as many Jordanians felt emboldened by the popular uprisings in the region.

Jordan's economy has been hit hard by the global downturn and rising commodity prices, and youth unemployment is high. Officials close to the palace have told CNN that Abdullah is trying to turn a regional upheaval into an opportunity for reform.

In his speech Sunday, Abdullah sought to paint Jordanians as one family, "and as head of the family, I favor no one individual or group ... or differentiate between them," he said.