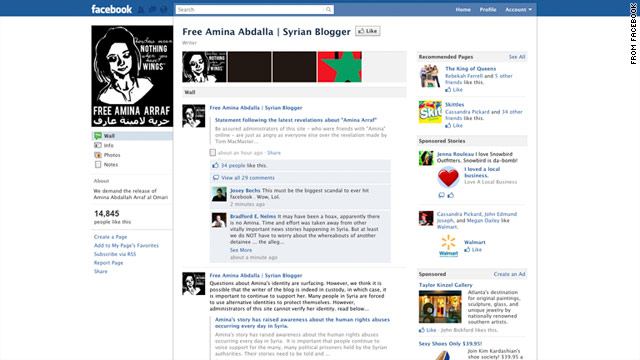 A Facebook page was created to raise awareness and support for the supposedly missing blogger.
STORY HIGHLIGHTS
RELATED TOPICS

(CNN) -- A new post on the "A Gay Girl in Damascus" blog that has been reported to belong to a Syrian-American woman claimed Sunday that her dramatic story is, in fact, a hoax.

In a post titled "Apology to readers," author "Tom MacMaster" said he is the sole person responsible for material on the site. The writer signed off from Istanbul, Turkey.

"I never expected this level of attention," MacMaster wrote. "While the narrative voice may have been fictional, the facts on this blog are true and not misleading as to the situation on the ground."

All previous posts, which began appearing in February, had been attributed either to "Amina Abdallah," the outspoken Syrian-American woman, or her cousin, "Rania Ismail."

Abdallah was reported on the blog to have been abducted last week and her alleged disappearance prompted online campaigns demanding her release.

Her story was picked up by international news groups, including CNN, making her an unlikely icon of the Syrian uprising.

CNN has not been allowed into Syria to cover the unrest and draws from social media and interviews with witnesses on the ground there to inform its reporting.

Despite the title of Sunday's post, MacMaster wrote: "I do not believe that I have harmed anyone -- I feel that I have created an important voice for issues that I feel strongly about."

The claims made on the blog could not be confirmed when CNN reported on Adballah's story last week. Calls to officials in Damascus and at Syria's Embassy in London went unanswered and attempts to contact her family were unsuccessful.

Amnesty International said recently that it believes more than 1,100 people -- including 82 children -- have been killed in Syria since a crackdown began in mid-March. Many bloggers and journalists have been arrested, rights groups have said.

Protesters are challenging President Bashar al-Assad, whose family has ruled Syria for some 41 years.