Daily life without fuel and power in Yemen 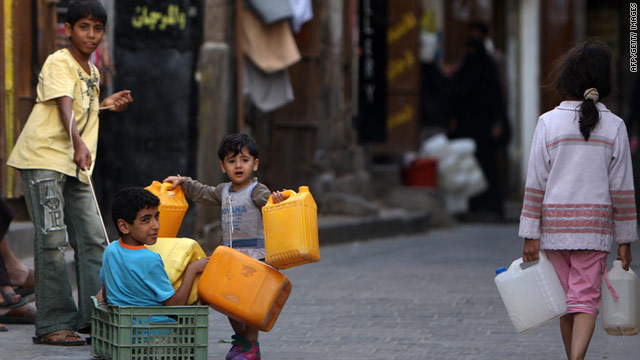 (CNN) -- In quieter times, Rafat Al-Akhali is a manager in a Yemeni pharmaceutical distribution company.

But these are not quiet times. Since April, unrest in the streets, an unstable economy and road blocks guarded by armed men on inter-city highways have prevented Al-Akhali's company -- and many like it -- from doing business.

Instead, Al-Akhali, a young activist involved in the uprisings against President Ali Abdullah Saleh has joined the newly-formed Justice and Building Party.

He is one of thousands of young Yemenis who have become political activists in recent months, regularly gathering in cities around the country to call for an end to President Saleh's 33-year grip on power.

President Saleh left the country for medical treatment in Saudi Arabia after an attack on his presidential palace on June 3. Vice President Abd-Rabbu Mansour Hadi has taken over and commands the armed forces and security services in his absence.

While Yemenis wait to hear what will happen in the long term, normal life has all but ground to a halt for many ordinary people.

Four-hour lines for fuel, a doubling of the price of water, power blackouts for 16 hours a day and a shortage of cooking gas are just some of the realities of daily life shortages described to CNN in telephone interviews.

"There's a lot of ambiguity about what's happening, and a lot of negotiations going on in the background," said Al-Akhali, 28.

"In the meantime, people are living with shortages. The fuel stations were completely closed for about five days and there were long lines when they reopened.

"The price of water has doubled because the pumps in the wells are operated by diesel, as are the vehicles to transport it. Cooking gas has also doubled in price."

"We have four-hour queues for fuel, and the electricity has been going off more than normal, affecting life for everyone," said Shargabi.

"We are used to losing power, but now we have no electricity about 16 hours a day.

"The problem is becoming worse every day. It concerns me that we might get to a point where it creates more tension and things break down."

Al-Shargabi said his house was hit by bullets earlier this month, but he had no idea whether he was deliberately targeted.

"It was Friday afternoon and there were a dozen of us in the house at the time," he said. "Several parts of the house were hit. Luckily no-one was injured."

Al-Shargabi, who lives in Sana'a, said: "People celebrated all over the country when Saleh departed, but then were more attacks on protesters and people realized Saleh's departure doesn't necessarily mean the collapse of the regime.

"I refrained from partying when I saw people being bombed by tanks on the streets. How crazy is that!"

We are living in crisis mode on a daily basis.
--Ibrahim Mothana, Yemeni student

Al-Shargabi, whose father was an opposition politician who opposed Saleh at the start of his 33 years in power, said he became involved in activism after working with the medical charity Medecins Sans Frontieres to treat victims of fighting in the north of the country in 2009.

"We are the most disenfranchised generation and we can stand and say 'we have nothing to lose, shoot us,'"he said.

Ibrahim Mothana, a 22-year-old student in Sana'a, said the shortages were affecting every aspect of life.

"We are living in crisis mode on a daily basis," he said. "We have blackouts for 16 hours a day, and with no electricity or gas you can't get to work or get water. It affects everything.

"There's a humanitarian crisis in the areas where there have been clashes because people fled their homes and can't go back.

"Politically, we are still living with uncertainty. It's more or less a deadlock between the vice president and the opposition parties. International efforts to bring them together don't seem to be working."

A six-nation Gulf Arab alliance, the Gulf Cooperation Council, has tried to broker a government-opposition agreement that would lead to Saleh's permanent departure, but that effort has so far been unsuccessful.

Al-Shargabi said: "We have achieved one goal because Saleh has left the country. Now the challenge is to have a real legitimate transitional government where everyone can have a say about how the country is run.

"If that's followed by legitimate elections, then the revolution will have been a success and a new era begins. It's an uphill struggle.

"I believe there should be a transitional period of one year, then we will have the economic and political environment we need for elections."