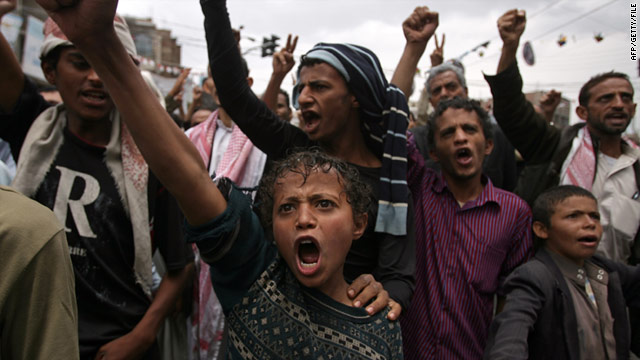 (CNN) -- Fighting flared in Yemen's volatile southern region Thursday, as security forces battled armed Islamic militants in one town and reports surfaced of arrests and deaths in two other cities.

Fighting erupted for six hours Wednesday in Hawta, the capital of Lahj province, when armed Islamic militants attacked government compounds, according to a security official who asked not to be named because he's not authorized to speak to the media.

Three people died and at least 12 people were wounded in the clashes Wednesday, the official said. The fierce fighting between security personnel and insurgents resumed Thursday, witnesses said.

It said al Qaeda militants in Zinjibar killed two residents and injured another in a mortar attack, and it reported the arrests of 10 al Qaeda members and five other people for firing at civilians and ransacking stores in Aden's Mansoura area.

The security official and witnesses provided more detail to CNN about the fighting in Hawta.

Armed militants took over security offices and fired rocket-propelled grenades at the central bank branch office and the compound of the judiciary on Wednesday, the official said.

Terrified eyewitnesses and residents said they were ordered by the militants to stay indoors, and shops were forced to shut down.

"The gunmen were in control quickly and government forces did not fight back in most cases," said Abdul Sattar Ali, a store owner in the province. "The gunmen occupied the buildings quickly."

Impoverished Yemen has been wracked with tension in recent months.

Anti-government demonstrations have engulfed the country, and protesters are demanding that President Ali Abdullah Saleh leave office. Saleh was wounded nearly two weeks ago when the presidential compound was attacked, and he is recovering at a hospital in neighboring Saudi Arabia.

Government forces have been locked in conflict with al Qaeda's Yemen wing, and authorities fear that the group, called al Qaeda in the Arabian Peninsula, or AQAP, is exploiting the country's political instability. It has a strong presence in southern Yemen.

AQAP has been labeled as a foreign terrorist organization by the United States.

"I worry a great deal about its continuing to grow and become more violent over time," he said. "I certainly would say that (the unrest) has gotten in the way of the training. ... The Yemeni forces are very focused on their own country right now."

On Thursday, Secretary of State Hillary Clinton classified AQAP operative Othman al-Ghamdi as a "specially designated global terrorist" under an executive order that "targets terrorists and those providing support to terrorists or acts of terrorism." It is the department's seventh listing of an AQAP member.

A senior administration official told CNN that Ghamdi was released from the Guantanamo detention facility in 2006 and had been one of well over 100 detainees the Bush administration sent to Saudi Arabia.

Al-Ghamdi "has been involved in raising funds for the organization's operations and activities in Yemen" and has "worked with other AQAP members to plan and stockpile weapons for future attacks," the State Department said in a news release.

He appeared in a video alongside Fahd al-Quso, an AQAP operative wanted for his role in the USS Cole bombing in October 2000, the department said. Ghamdi was identified publicly as AQAP's operational commander in the video, released in May 2010,

The State Department said a U.N. panel has taken similar action against al-Ghamdi.