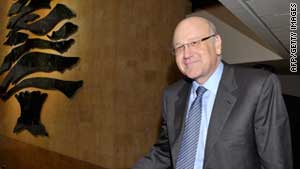 (CNN) -- Lebanon dispatched troops Friday to quell clashes that arose in the city of Tripoli over the Syrian crisis.

Prime Minister Najib Mikati said on TV that Lebanese army reinforcements went to two neighborhoods to "put an end to what happened."

The clashes were between Lebanese Alawites who support the Syrian government and Sunni Muslims who oppose it. There also had been a large demonstration in Tripoli in support of the Syrian people.

The clashes in Tripoli killed one soldier and three civilians and injured two soldiers and 10 civilians, the army said. Lebanon's National News Agency said one of those killed was an official with the Democratic Arab Party, an Alawite entity.

"I asked the military and the security forces to impose the law and order in the city and strike with an iron fist," said Mikati, who noted that authorities are investigating.

"I am not accusing anyone. We don't know who started the clashes," he said. "The timing is suspicious, and the civil peace is a red line that no one can cross."

The Alawite faith is an offshoot of Shiite Islam that dominates Syrian leadership; Syrian President Bashar al-Assad is an Alawite. The majority of Syrians are Sunni Muslim.

There's been tension between the two groups in Lebanon. Alawites and Sunni/leftist militias fought at various junctures during the 1975-90 Lebanese civil war until the Syrians established a presence there.

The majority of the Sunnis in Tripoli loathe the Syrian regime, but the Alawites in northern Lebanon thrived during the Syrian presence. Tensions have increased between the groups during the most recent Syrian crisis.