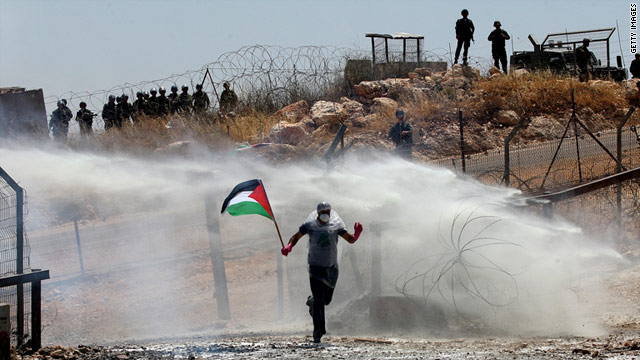 A protester runs through tear gas during a demonstration last week against a barrier in the West Bank town of Bilin.
STORY HIGHLIGHTS
RELATED TOPICS

Jerusalem (CNN) -- Four years after an Israeli high court initially ruled that the path of the barrier separating Israelis from Palestinians around the West Bank village of Bilin needed to be rerouted, the Israeli military Wednesday began to dismantle parts of the controversial fence.

Peter Lerner, a spokesman for the Israeli central command, told CNN that "We are in advance preparations for removing the old fence so there (are) some elements that are being removed." He acknowledged that the action was being taken in adherence to a subsequent 2008 Israeli court ruling which found sections of the fence had been built illegally on Palestinian land.

"We are implementing the court ruling to the letter," he said. "We negotiated with those that appealed to the high court and sat down with them and basically drew out the new contours for the security fence."

The barrier in Bilin has become the focus of a weekly protest that has been going on for over six years, pitting Palestinians and international activists against Israeli soldiers. Hundreds have been injured in the protests and a number of demonstrators have been killed.

Michael Sfard, a lawyer representing residents of Bilin, said the court ruled that about 172 acres of land would ultimately be returned, noting that it was less than half of what had been lost.

Construction of Israel's controversial barrier was begun by Israel in 2002 in an stated attempt to stem the tide of Palestinian suicide bombing attacks that became a frequent and deadly occurrence in Israel during the course of the second intifada, which began in September 2000.

From 2001 to 2004, 488 Israelis were killed in suicide attacks, according to figures provided by Israel's internal security agency, known as the Shin Bet.

In a 2004 nonbinding ruling, the International Court of Justice ruled that construction of the barrier violated international law.

The barrier is approximately 400 km (250 miles) long and is made of 20-foot sections of concrete wall in more densely populated areas and large barbed wire fencing in rural sections. Construction of the full 700-plus kilometers of the barrier has stalled in recent years as a result of court challenges and budgetary issues.

In a 2009 report, the United Nations said some 150,000 Palestinians were surrounded on either three or four sides of the barrier.

For many Palestinians affected by the barrier, this has meant the imposition of a complex permit system to allow them to travel, restricting access to education, medical care and employment opportunities.

The barrier has become a potent symbol of the sharp divisions between Israelis and Palestinians, with both sides choosing to name the barrier differently.

Many Palestinians refer to the barrier as the "apartheid wall" and view it as nothing more than a land grab by Israel to help support and expand settlements in the West Bank. The Israeli government chooses to refer to it as the "security fence," necessary to protect its citizens from what it views as terrorist attacks.