Syrian official: 'There is no crackdown' 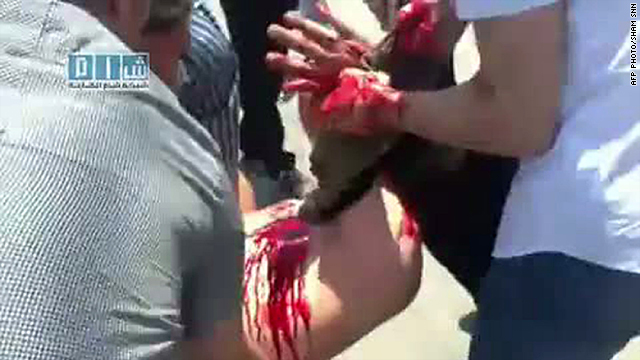 Fayssal Mekdad, speaking in an exclusive interview with CNN's Hala Gorani in Damascus, said the people are members of "extremist religious groups" and they are "financed" outside Syria.

But, he didn't elaborate on the identities of the groups, their makeup or their backers. The majority of people in Syria are Sunni Muslims but the government is dominated by Alawites, a minority group whose faith is an offshoot of Shiite Islam.

Government media have consistently blamed the killings on extremists and armed groups without providing much context on who they are.

Some 1,337 protesters and 341 soldiers and security forces have died since the unrest began, Rami Abdelrahman, head of the London-based Syria Observatory for Human Rights, said Saturday.

Another 10,000 people have been jailed since mid-March, he claimed, when the anti-government protests began. In some localtes, the demonstrations have gained momentum since then despite widespread reports of the government's violent response.

Yet Mekdad disputed the steady stream of accounts that the military and security forces have gone after the demonstrators.

"There is no crackdown," said Mekdad, speaking to CNN after another bloody day of demonstrations on Friday. "There is a crackdown from these military groups against the government and against civilians."

The minister's comments came amid reports of even more anti-government protests around the Middle Eastern nation.

Videos posted on YouTube shows marches and demonstrations in Damascus, Latakia, Idlib and Homs, with the biggest rally appearing to be in Assi Square in Hama. Salma al-Dairi, a Washington-based Syrian activist, estimated that more than 120,000 people attended the event in the eastern city, with footage showing them listening to speeches and reciting chants.

While the videos appeared to be from Syria, CNN was not able to independently verify their authenticity. The network's reporters had been barred from officially entering Syria, and its reporting about events inside the country had been limited largely to what the network was able to piece together based on official government reports and accounts and videos posted on the Internet.

CNN journalists arrived Thursday in Syria, where they were assigned government minders to accompany them on video shoots.

The minders said they had not received permission to take the journalists to the areas where protests were occurring. Instead, they took the journalists to Damascus' historic old city, where their appearance on the streets prompted a crowd of a few dozen Syrians to erupt into pro-government chants. Posters and pictures of President Bashar al-Assad quickly materialized.

Al-Dairi also said that an activist leader, Khalil Hajj Saleh, was arrested Saturday in Rakka after being summoned by Syrian authorities. Security forces prevented a funeral procession in Barza for five people that had been killed in that city on Friday, according to al-Dairi. Neither account could be verified by CNN.

One Syrian activist group reported 20 anti-government protesters dead during Friday demonstrations and the government. The Local Coordination Committees of Syria -- an organization pushing for regime change in the country -- said five youths, including three 17-year-olds, were among those killed. The group said clashes occurred in several cities of Daraa, Homs, and Hama.

CNN could not immediately verify the reported death tolls.

One of those three said members of families distributed weapons to the people, and another said weapons were purchased in neighboring Turkey, according to the SANA report.

Many people in and around Jisr al-Shugur fled to Turkey in recent weeks to escape a military offensive. The governor's office in Turkey's southern Hatay province said Friday that the number of Syrian refugees in the country has reached 11,739.

Mekdad on Saturday blamed "extremist groups for driving (Syrians) by force to go to Turkey," insisting that Syria's government is in no way blame.

Anger toward the Syrian government has spread across the world. The European Council condemned Syria on Friday, saying the "regime is calling its legitimacy into question" by opting for a "path of repression instead of fulfilling its own promises on broad reforms."

The council -- comprising the heads of state of European Union member states -- deplored the "ongoing repression and unacceptable and shocking violence the Syrian regime continues to apply against its own citizens."

The European Council expressed grave concern about reports of Syrian military activity near the Turkish border at Khirbet al-Jouz and urged "maximum restraint."

The statements came after the Council of the European Union voted Thursday to expand sanctions against Syria by freezing the assets of seven people and four businesses with connections to the regime.

The detail was published in the European Union's Official Journal on Friday, and British Foreign Secretary William Hague hailed the measures.

Among those sanctioned were three commanders in Iran's Revolutionary Guard Corps accused of helping the "regime suppress protests" and "providing equipment and support" to the government, according to the European Union Official Journal. One of the three is Brig. Cmdr. Mohammad Ali Jafari, the corps' general commander.

Two of those sanctioned were first cousins of the president. They are Zoulhima Chaliche, head of presidential security, and Riyad Chaliche, director of the military housing establishment. Two others were business associates of Maher al-Assad, the president's brother and commander of the army's 4th Division and "strongman of the Republican Guard."

Mekdad, however, blasted European authorities as not wanting "to know the reality" and "biased to the point that they want to support these extremist groups ... at the expense of the wishes of the Syrian population."

"If they believe this kind of pressure will change the political positions of Syria vis-a-vis the Arab-Israeli conflict, or the way we deal with Europe on ... different issues, they are very wrong," he said.