A Picasso comes to the Palestinians 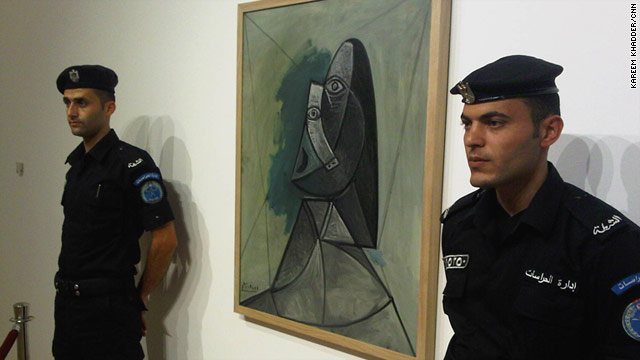 Security guards keep close to the "Buste De Femme" by Pablo Picasso. It's on loan from a museum in the Netherlands.
STORY HIGHLIGHTS

Ramallah, West Bank (CNN) -- In a small showroom in the West Bank city of Ramallah, two Palestinian security guards carefully watch over a masterpiece by one of the most famous artists in modern history.

The "Buste De Femme," painted by Pablo Picasso in 1943, is estimated to be worth $7 million. It was borrowed from the Van Abbemuseum in Eindhoven, the Netherlands, by the International Academy of Art Palestine for a monthlong display in the West Bank.

While Horani acknowledges that just some 20 kilometers (about 12.4 miles) away, there are many contemporary masterpieces in Jerusalem museums. He is quick to point out the limitations for art lovers who live in the West Bank.

"It's not accessible for Palestinians from the West Bank to go there and see the artwork," making reference to Israeli security restrictions. "This raises the questions around the political situation and art in general and its accessibility," Horani said.

Painted just a few years after the Spanish Civil War, the "Buste De Femme" one of Picasso famous paintings. The Spanish artist wanted to express his feelings about the bloody war that had torn apart his homeland. 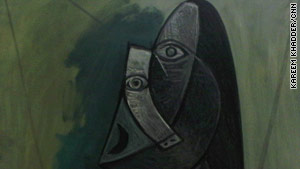 Professor Lynda Morris of Norwich University College of the Arts in England and a specialist on Picasso, compared it with the political situation in the West Bank.

She said Picasso strived to understand both sides of the Spanish Civil War, and that holds lessons for today. "... Probably in the West, we know much more of the Israeli side more than the Palestinian side, and the importance to begin to address that balance," Morris told CNN.

Twenty feet away in an adjacent room of the academy, the special packing crate for the painting has been put on exhibit as well with the shipping label "From Eindhoven to Palestine" displayed prominently.

"This is the smallest museum and this box will be part of the exhibition," Horani told CNN in an advance preview of the painting.

He said the painting's 24-hour journey from the Netherlands to the West Bank was documented as it made its way to Tel Aviv. It was then escorted by an Israeli security firm to Qalandia checkpoint and then on to Ramallah.

The painting exhibition, which officially opened its doors to the public on Friday, was attended by Palestinians and international art lovers.

Palestinian Authority Prime Minister Salam Fayyad went to the opening. He said the painting would go back to the Netherlands taking with it a little bit of the region with it.

"Destination Palestine, by itself, is of great significance to us," Fayyad said. "It is really moving to see this great work of Picasso is here and this portrait goes back to Eindhoven and part of Palestine will be with it," Fayyad told CNN after touring the exhibition.

Art connoisseur Ola Abu Gharbieh said seeing the work in the West Bank made her proud.

"Palestinians are artistic. They are fond of art, and they had the chance and opportunity to bring such a universal and international work of art here in Palestine, and I wish to have similar experiences in the future."

"This is really a big thing. We can show the world we can do something like this. Our life is not only focused on war and on all the bad things that happen to us while we are living in closure" Hadid said.

"This breaks all closures to Ramallah and Palestine. Maybe next time we will have a masterpiece by another artist -- Van Gogh or someone else. It's a first step for bigger events hopefully."