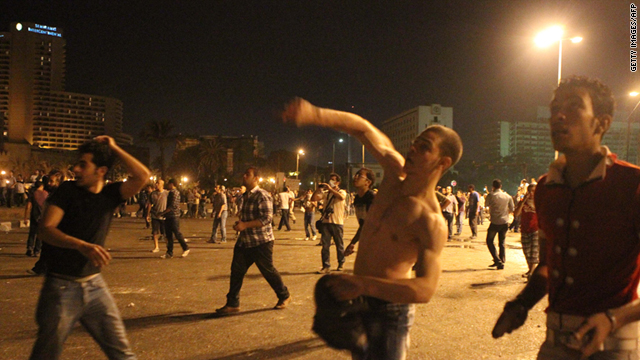 Protesters throw stones at riot police during clashes in Tahrir Square in Cairo, Egypt, during the early hours of June 29.
STORY HIGHLIGHTS

Cairo (CNN) -- Egypt sent hundreds of troops with armored vehicles onto the streets Wednesday to protect the Ministry of the Interior, the army taking over from the police, as anti-government protests raged.

The confrontations began when a planned memorial for people killed in Egypt's revolution earlier this year turned into an angry demonstration against the country's interim military government.

Clashes began Tuesday afternoon and continued overnight and into Wednesday, with intense confrontations between relatives of victims on one side and security forces on the other.

Many Egyptians are angry at the slow pace of change since President Hosni Mubarak resigned on February 11 after protests.

A group called the January 25 coalition issued a range of demands Wednesday night, a day after the demonstrations began.

They called for the "speedy trial of snipers and killers of protesters, the removal of Cairo's head of security and the official spokesman of the Ministry of Interior" and "an immediate investigation in the events of last night."

The group, named for the day anti-government protests began this year, also called for the release of detainees held overnight and the "immediate expulsion of security officers who continue to butcher and kill Egyptian people," among other demands.

Protesters burned tires and threw Molotov cocktails, and police responded with tear gas, bullets and pellets in the biggest demonstrations in Cairo in months.

But despite the efforts of police, demonstrators maintained their positions in Cairo's Tahrir Square, increasing their numbers to about 2,000.

Dr. Hatem Ashraf, the minister of health, said 75 people were admitted to hospitals, with 10 still there after 65 people were treated and released.

Ministry spokesman Dr. Adel Al Adawy said earlier that 32 police officers were injured and more than 590 people were treated at the scene of the clashes. Some 23 ambulances were running to help care for the wounded, he said.

Nine people were arrested, said Alla Mahmoud, a spokesman for the Ministry of Interior.

"Thugs carrying swords and weapons infiltrated the protesters and attacked the Ministry of Interior with Molotov cocktails and rocks," Mahmoud said.

A makeshift clinic was established in a nearby mosque where dozens of people were treated for minor wounds and fatigue from inhaling tear gas. Many people were seen bleeding from their heads and had suffered bullet wounds to the chest and face.

Several thousand protesters chanted against Gen. Mohamed Hussein Tantawi, who heads the Supreme Council of the Egyptian Armed Forces. The council has been running the country since Mubarak was forced to step down.

The council said the demonstrations "have no excuse but to destabilize the security and stability of Egypt."

The armed forces statement urged "the great Egyptian people... not to follow these calls... for the sake of the security and safety of Egypt in these difficult circumstances."

Ambulances streamed out of the square in the aftermath, transporting protesters to hospitals, while others were treated on the scene.

Noor Noor, the son of presidential candidate Ayman Noor, was seen bleeding with a serious injury to his eye and was later transferred to the hospital.

The protesters blocked the entrances to the square as calls were made on the Internet for more people to join the cause.

The imam of the nearby Omar Makram Mosque called via loud speaker for police to stop attacking the protesters, saying Tahrir Square belonged to "the revolutionaries." He also urged the demonstrators to go home.

By late afternoon Wednesday, the square that was the center of the revolution was no longer blocked, but demonstrators remained at the Interior Ministry, the focus of much of the anger.

The human rights group Amnesty International has estimated at least 840 people were killed and more than 6,000 wounded during the 18-day revolution that began in late January.

Mubarak is scheduled to face the Cairo Criminal Court on August 3 on charges of corruption and deaths of protesters, the justice department said Wednesday.

Egypt's military rulers have set parliamentary elections for September. Protests have continued in the months since Mubarak's ouster as Egyptians have demanded speedier reforms and economic improvements.