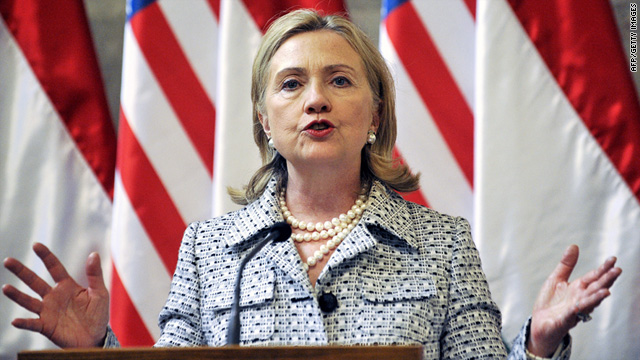 Secretary of State Hillary Clinton says the U.S. is willing to talk to those who are "peaceful and committed to nonviolence."
STORY HIGHLIGHTS

(CNN) -- The Obama administration is open to dialogue with the Muslim Brotherhood in Egypt, U.S. Secretary of State Hillary Clinton said Thursday about the Islamist group.

"We believe, given the changing political landscape in Egypt, that it is in the interests of the United States to engage with all parties that are peaceful and committed to nonviolence, that intend to compete for the parliament and the presidency," she told reporters in Budapest, Hungary. "And we welcome, therefore, dialogue with those Muslim Brotherhood members who wish to talk with us."

But, she added, any such contacts "will continue to emphasize the importance of and support for democratic principles, and especially a commitment to nonviolence, respect for minority rights, and the full inclusion of women in any democracy. You cannot leave out half the population and claim that you are committed to democracy."

She added that the policy is not a new one and that the Obama administration has had "limited contacts" with the group.

Mahmoud Ghozlan, a spokesman for the Muslim Brotherhood, said he had heard of the U.S. interest in dialogue only from media reports.

"The U.S. administration has supported dictators for decades and authorized torture, repression and colonization," he said. "The U.S. is hated in the Middle East region more than any other country according to polls published in the U.S. If the U.S. is serious in opening a dialogue, they must first respect the people's choices for a true democracy, independence and respect their choice of leaders. We would welcome the open dialogue, if they are serious and transparent."

The organization adopted a low profile during Egypt's uprising that resulted in the resignation of President Hosni Mubarak. In the immediate aftermath of his departure, the Islamist umbrella group said it wanted to promote democracy but did not intend to field a candidate for president.

Critics say that Mubarak used the Muslim Brotherhood to scare others into believing only his regime could protect the country from the brotherhood installing an Islamic regime.

But the Muslim Brotherhood has said its newly formed Freedom and Justice party is not theocratic.

The group has sparked controversy in the United States, where some see it as a non-violent, Islamic social welfare organization supportive of a democratic process while others call it a radical extremist group with the goal of creating a theocracy in Egypt.

President Barack Obama recently downplayed the prospect of the Muslim Brotherhood playing a major role in Egypt, saying it is just one faction in Egypt that doesn't have majority support.

Others, however, distrust the Brotherhood's intentions.

Former CIA Director Mike Hayden said the Muslim Brotherhood's organizational prowess could put it in a position to "enjoy a disproportionate power in shaping the new government. The question is: Will it become more radical?"

The Egyptian Muslim Brotherhood was founded in 1928 to oppose British control of Egypt with its goal the creation of an independent Islamic state. Although it allegedly engaged in assassination and other violence against the British and supported the coup that brought Gamal Abdel Nasser to power in 1952, the Brotherhood had been illegal since 1954, when it was convicted of attempting to assassinate Nasser, charges the group denied.

Nasser had ruthlessly suppressed the group, and his successors, Anwar Sadat and Mubarak, continued the repression. The Brotherhood subsequently renounced violence, continues to provide social services to the populace, opposes the peace treaty with Israel and supports democratic elections.