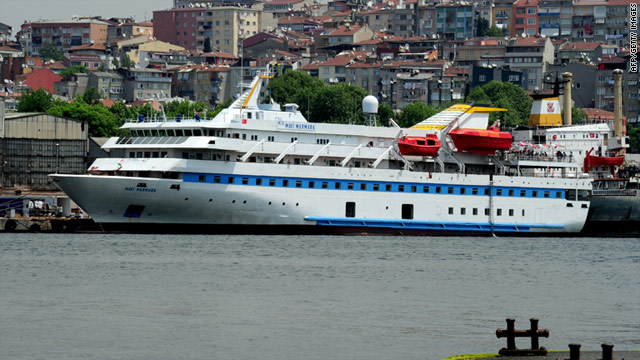 In May 2010, the Mavi Marmara and five other aid ships were on their way to Gaza when Israeli soldiers boarded it.
STORY HIGHLIGHTS

Jerusalem (CNN) -- An organizer of the Gaza flotilla said Thursday that one of its ships has been sabotaged while anchored in Turkey's territorial waters.

The propeller of the Irish ship Saoirse was damaged by what one organizer says is plastic explosives, the second ship to be damaged this week ahead of a flotilla that intends to challenge Israel's maritime blockage of the Gaza strip.

The flotilla, which is expected to leave soon but has faced a series of bureaucratic and technical delays, is a commemoration of the one-year anniversary of a similar flotilla that resulted in a clash in international waters with Israeli navy commandos that killed nine people, including an American.

"We believe that plastic explosives were used to blow and weaken the propel shaft, and this would have sunk the ship in open sea," said Fintan Lane, one of the Irish boat coordinators.

We believe that plastic explosives were used to blow and weaken the propel shaft, and this would have sunk the ship in open sea.
--Fintan Lane, Irish flotilla boat coordinator.
RELATED TOPICS

Lane said the damage was similar to what happened to another flotilla boat docked in Piraeus, outside of Athens.

He called on the Greek and Turkish authorities to investigate what he called an act of terror.

While Lane on Thursday did not outright blame Israel for the alleged sabotage, there have been a number of accusations by organizers about the government's effort to block its flotilla.

A spokesman for Israel's Foreign Minister said he was "not going to get inside accusations. They are vague. There is nothing behind them."

"We have not concealed our case, our arguments, our diplomatic efforts. It's all out in the open."

The Israeli military Tuesday claimed flotilla participants had threatened to kill Israeli military personnel should their boats be boarded. They allege sacks of sulphuric acid were being stockpiled on boats to be used in attacks on Israeli commandos.

Flotilla organizer Medea Benjamin dismissed the allegations as ludicrous, saying: "They see this nonviolent, rag-tag group of ships as such a threat they're using their entire propaganda apparatus, and their diplomatic and economic clout to try to stop 300 peace activists. It's pathetic."

In May 2010, the Mavi Marmara -- owned by the Turkish Humanitarian Relief Foundation, or IHH -- and five other ships were on their way to Gaza with humanitarian aid and about 700 activists from various countries when the Israeli soldiers boarded it.

An independent Israeli commission, led by retired judge Yaakov Turkel, later found that the Israeli commandos "acted professionally and in a measured manner in the face of unanticipated violence" when they seized the Gaza-bound aid ship.

Secretary of State Hillary Clinton told reporters Friday that she didn't think the flotilla plan for this year "is useful or productive or helpful to the people of Gaza."

Clinton's comments followed an even harsher statement by State Department spokeswoman Victoria Nuland, in which she criticized what she called "irresponsible and provocative actions that risk the safety of their passengers."