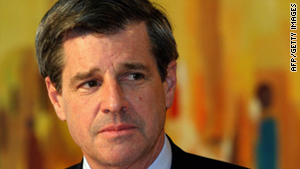 Paul Bremer, the U.S. civilian administrator of Iraq after the fall of Saddam Hussein, is on Iran's list.
STORY HIGHLIGHTS
RELATED TOPICS

"The American officials will be tried in Iranian courts in absentia before they are referred to the relevant international tribunals" if Iran's parliament approves the plan, Tehran member of parliament Esmaeel Kowsari said, according to Mashregh News.

He did not name them, but Iran's government-backed Press TV said in May that parliament planned sanctions on Americans including former Defense Secretary Donald Rumsfeld and the current and former commanders of the Guantanamo Bay detention center.

Paul Bremer, the U.S. civilian administrator of Iraq after the fall of Saddam Hussein, and Gen. Tommy Franks, who was head of U.S. Central Command during the invasions of Afghanistan and Iraq, are also on the list.

Kowsari said the American officials will be charged with violations of human rights.

"The true criminals are the same people who pretend to support human rights. The Islamic Republic of Iran will diligently pursue the trials of these American officials and will defend the rights of the downtrodden people of the world," said Kowsari, the deputy chairman of Parliament's National Security and Foreign Policy Committee.

The United States imposed a new round of sanctions on Iranian companies and officials in late June, prompting an Iranian complaint to the United Nations.

The United States and many of its allies are trying to slow or stop about Iran's nuclear program, which they fear is aimed at developing nuclear weapons. Iran denies that, saying it's for civilian energy and medical use.