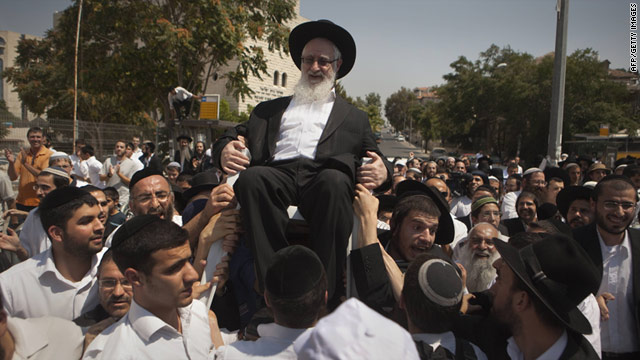 The demonstrations underscored growing tension between religious and judicial authorities in Israel following the police detention and questioning of two popular rabbis regarding their alleged endorsement of a book that justifies the killing of non-Jews.

Speaking to the assembled crowd, Rabbi Zalman Melamed, the head a religious school in the West Bank settlement of Bet El, said: "The people of Israel are returning to the land of Israel and the Bible. Neither the attorney general's office, nor the Supreme Court, nor the police want this, but nobody can stop this divine process."

On Sunday, Rabbi Yaakov Yosef, the son of Rabbi Ovadia Yosef the spiritual leader of the Shas party and an important member of Israel's governing coalition, was questioned by investigators on suspicions of incitement to violence and racism according to Israeli police.

Israel is a nation of laws, as I said a few days ago. Nobody is above the law and I demand that every Israeli citizen respect the law.
--Israeli Prime Minister Benjamin Netanyahu.
RELATED TOPICS

Yosef's detention was the second high-profile move by police in just over a week in their investigation of public endorsements of a religious treatise called "The King's Torah" written by Yosef Elitzur and Rabbi Yitzhak Shapira, the head of a Jewish religious school in the extremist Israeli settlement of Yitzhar.

The book, which focuses on the application of Jewish law, offers justification for Jews to kill non-Jews, including children, during times of war. Its publication in 2009 created a public firestorm leading to a police investigation which is still ongoing.

Last week Dov Lior, the chief rabbi of the Israeli settler community in the Hebron area of the West Bank, was also detained for questioning by police in connection with the investigation.

Yossi Dermer, a legal representative of Lior called the police investigation of the rabbi "political persecution to intimidate them from expressing the ideas of the Torah" and said that contrary to the arguments being made by some in Israel's secular community, "The rabbis are not above the law but what is above the law is the Torah...."

Israeli police had been seeking to speak with Lior and Yosef for months as part of their ongoing probe but the rabbis refused to cooperate prompting police to detain both for questioning.

Lior's brief arrest was followed by a number of large public street demonstrations by right-wing supporters in Jerusalem which included an attempt by some to enter the grounds of the country's Supreme Court. Following Sunday's detention of Rabbi Yosef, police were forced to use a water cannon to disperse hundreds of rock-throwing supporters who gathered outside his home.

Monday night's rally outside the Supreme Court building was held in opposition to the government's handling of the case and many of the speakers stressed the need for the people of Israel to unite and maintain respect for their spiritual leaders.

The protests are the latest development in a continuing schism between secular and religious Israelis regarding the nature of the state and whose authority is supreme.

The rabbis' detentions have prompted criticism from some members of Prime Minister Benjamin Netanyahu's coalition government, but at a Sunday cabinet meeting Netanyahu defended the actions of the police .

"Israel is a nation of laws, as I said a few days ago. Nobody is above the law and I demand that every Israeli citizen respect the law."