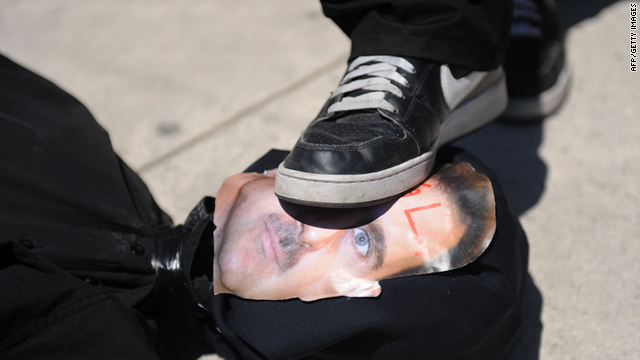 A protestor steps on a portrait of of Syrian President Bashar al-Assad at a demonstration on June 24, 2011, in Istanbul. Turkey.
STORY HIGHLIGHTS

(CNN) -- He says it is not safe to communicate through Twitter.

Halfway around the world, a 20-year-old Syrian answers my questions. Every stroke is thoughtful, every word heavy with fear.

Homes of activists raided in Syria

Speaking out against Syrian regime

He asks to go by the name of Ahmed.

CNN cannot independently confirm the account that follows, but communications with Ahmed went on for many days, and he provided detail about events and places that supported what he told us. CNN was also able to contact several of his online associates independently, and they confirmed his background and the events he described below.

"I had an ego. You never really think you're going to get caught."

Ahmed has been involved in peaceful demonstrations against the Syrian regime since the first days of the uprising, often with his 52-year-old father.

But one day in May, on a street in Damascus, he and other protesters are ambushed.

In a moment, everything becomes distorted: changed expressions and frenzied feet.

"Many other protesters ran, but I was stuck. I tried to knock on nearby doors. Nobody answered. I found myself standing in front of security forces. They looked at me but didn't make any move. I was convinced at that moment that nobody was going to open their door for me. So I ran."

A security officer strikes him across the head with his stick. He continues to run. He feels another thump. And another one.

"I was down on the ground. The officers gather around me and hit me with their weapons on every bone in my body. Especially my head. I thought I was dead."

A car drives up; they throw him in. There are two other guys in the car, protesters bleeding like him.

"They throw our heads to the ground and handcuff us with tight white plastic cuffs. We were transported us to a security compound, not a police station. They threw us in something like a garage, and the beating began."

"You want freedom, aha!" one of the officers screams as he thrusts his stick into the young man's back. "You want to topple the regime?!"

Ahmed spots electricity sticks from the corner of his eye. Long batons that resemble torches press down toward his arms and chest, each time for three to five seconds.

It is dark when he regains consciousness. He remembers where he is.

"I'm on the ground, almost naked. They start searching our bodies and clothes to see if we were hiding anything."

They find nothing. But the humiliations and hitting do not stop. Slurs and smears fill the dim room: insults about their mothers, sisters, their God. He is taken to a cell.

"The cell is only meant for two people, but there are 25 of us. It was 2 by 5 meters small. We could barely move."

His ID, money and cell phone are confiscated. The security officers return within a few hours with a list of names. Ahmed is on it.

"They handcuffed, blindfolded and took us to a building. Here, we started to hear only screams. Agonizing screams, the kind you can't get out of your head. I started to pray. I asked God for forgiveness."

He is forced to stand -- listening -- for hours. His hands swell. The plastic around his wrists pinches hard at his skin.

"Then, someone came and took me. He asked me to sit down. But another begins talking. I can still hear his voice in my head."

"What is your name? Who are your parents?" the man yells. It is the first of many interrogations.

"Are you involved with a political party?"

"I wanted to tell him that there is only one party in Syria, but I say: no."

"How much money do you get from Israel? Who are your outside connections? Why did you protest, you animal? "

"After about 20 minute of whippings, I faked that I was very tired and in pain. I began to say nonsense words. The interrogator stops."

"OK, let's put everything behind us and start a dialogue," the officer says. "Tell me your demand. You can speak freely."

"I have no demand. Everything is fine with me," Ahmed says.

Silence. He must prove himself. He praises the reforms of al-Assad.

The interrogator detects insincerity, and the beating resumes. "The reforms are a symbol of our leader's generosity, and you are joking about them," he shouts.

Seconds into minutes, minutes into hours, and the beating stops. The blindfold comes off, and he is handed a sheet of paper.

"It was a statement of the interrogation. I noticed that he wrote I was protesting, so I asked if I can read it before I sign it."

The officer looks at him in anger. A punch in the face. "Sign, you animal!" He signs without reading it. The blindfold goes back on, and it is back to the cell.

That night he remembers the words of his mother. He remembers her mythical-like tales of a grandfather he never knew.

"I always think of him, but especially his bravery. He sacrificed his life for our country while fighting the French and their occupancy of Syrian land. We may be in different times, but we are still fighting a war against injustice."

It is dark in the cell, but Ahmed cannot fall asleep. Like the whispers of the men around him, his thoughts shift seamlessly but quickly.

"My mind wouldn't stop running. I was thinking about my grandfather, my mother, my brothers ... about Syria, about tomorrow. I kept thinking, 'please, just keep me here forever if you have to, but do not take my mother and brothers. They cannot handle this.' "

There were more interrogations in the morning. More whippings.

"The second day was a lot like the first. They tried so hard to make me confess I was protesting against the regime, but I wouldn't."

So the interrogators gave him lessons: 101s on patriotism, loyalty to the president, conspiracy in Syria and fighting Israel.

The Syrian government has consistently blamed the violence and protest casualties on armed gangs and extremist groups with religious affiliations.

"The men shouted for hours, explaining to me what it means to be a good Syrian. They asked me ridiculous questions: 'Do you actually believe what you see on Al-Jazeera? Do you really think security forces are killing protesters?!'"

The questions and abuse last three days. By the end of the third, Ahmed is sent home under the signed condition that he never protest against the regime again. He said it was an agreement signed by all of the detainees but taken seriously by very few.

"I've protested now for two months without being arrested again," he says. "The only reason I won't is because of my mother."

She began taking antidepressants when he was detained, to cope with her worry. Now, he says, he must lie to her when he joins friends and family in demonstrations.

I ask him whether he ever gets scared that he will be arrested again. He quickly responds.

"No, I'm not scared. They arrest anybody they suspect. Why, you ask? Only to frighten people.

"But they don't understand that will only make people angrier. And that is what will be bring their end."