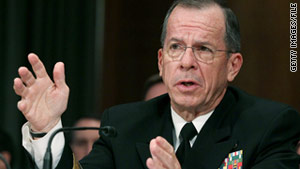 Washington (CNN) -- Fresh warnings came from the Pentagon on Thursday that Iran is supporting extremist militias in Iraq that are killing U.S. troops.

And Joint Chiefs Chairman Adm. Mike Mullen said any potential agreement with Iraq for U.S. forces to stay on beyond the end-of-the-year deadline must confront the issue of Iranian involvement.

"Iran is playing an out-sized role right now," Mullen said at a lunchtime conversation with journalists at the Pentagon. "Iran is very directly supporting extremist Shia groups (in Iraq), which are killing our troops."

"They are shipping high-tech weapons in there -- RAMS, EFPs -- which are killing our people and the forensics prove that," Mullen said. "From my perspective, that has to be dealt with, not just now because it is killing our people, but obviously in the future as well."

CNN obtained a tape of the question-and-answer session with Mullen. His comments come as the clock is ticking down toward withdrawal of all U.S. troops from Iraq by December 31, and amid speculation in Washington and Baghdad that the Iraqi government will ask a small U.S. force to stay on. There are 46,000 U.S. troops in Iraq now.

Mullen confirmed that discussions are under way. "Negotiations are ongoing," he said, adding that any final decision would be for the presidents of Iraq and the United States. He said any agreement with Iraq "has to be done in conjunction with control of Iran."

Mullen said that Iran had made a decision in 2008 to scale back its involvement in Iraq but had recently stepped up its activities, possibly so it could claim credit for the American withdrawal.

And he denied that the formal end to U.S. combat activities In Iran would prevent American response against Iranian-supported attacks.

"There is never a formal end to self-defense. Being able to respond and defend yourself is very much a part," Mullen said. "Anything we do would be very clearly focused on the inherent right of self-defense."