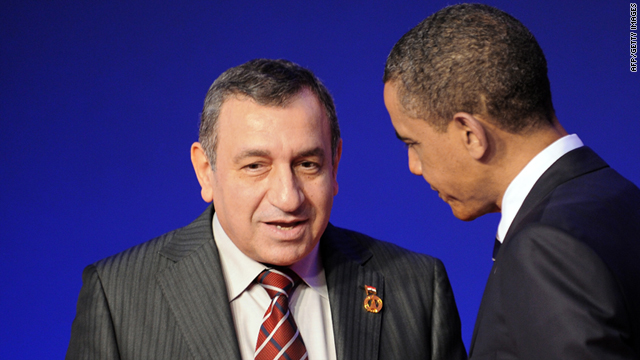 Cairo (CNN) -- Egyptian Prime Minister Essam Sharaf said Monday he would reshuffle his cabinet within a week and called for the trials of former officials accused of killing protesters to be open to the public.

The announcements were meant to mollify demonstrators, angered at the slow pace of reform since President Hosni Mubarak resigned on February 11 after protests.

It was not immediately clear whether his speech on state TV had its intended effect.

"A cabinet reshuffle will be made within a week. This change will achieve the goals of the revolution and reflect the real will of people," Sharaf said.

He also said he had asked the Interior Minister to speed up measures to restore "security and discipline to the streets of Egypt."

Protesters have been camped out in Cairo's iconic Tahrir Square, the center of the revolution that toppled Mubarak, for days. Many have brought TV sets, laptops, books, sleeping bags and clothes with them, suggesting they plan to stay for the long haul. Traffic around the square has been blocked.

A group called the January 25 Coalition, named for the day anti-government protests began this year, has said its members will stay in the square until their demands are met. Among its published demands are: Economic reform, the immediate resignation of the interior minister, speedy trials of former officers and the end of military tribunals.

Sharaf said Monday he had asked the Supreme Council of Justice to make all trials of former officials and policemen accused of killing protesters open to the public.

To Egyptians, he urged patience and asked them to "allow justice to take its course."

Monday's speech by Sharaf was his second in recent days.

On Saturday, he addressed the nation, ordering the termination of all officers accused of killing protesters during the popular uprising that ousted Mubarak.

That speech was met with disdain by demonstrators on the ground, who said it was too little, too late.

"He made promises he has not kept. This is a revolutionary moment in our history and we need a leader who understands what that means," said Wael Omar, a founder of Radio Tahrir.

"We gave them almost six months to clean the country but nothing changed," added Sherif Barakat, a protester.

Alla Mahmoud, spokesman for the Interior Ministry, said that 18 generals and several dozen junior police officers will be charged, beginning on August 1.

And Mubarak himself is scheduled to face the Cairo Criminal Court on August 3 on charges of corruption and deaths of protesters, officials have said.