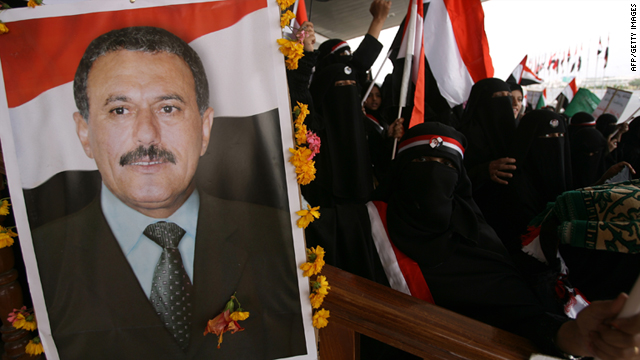 Zaid Thari, a political advisor for Saleh's ruling General People Congress Party, said the president's health is improving quickly and that Yemenis will celebrate his return.

"The Yemeni government all along insisted that Saleh's health situation was not major," Thari said.

Saleh has been undergoing medical treatment in Saudi Arabia following a June 3 attack on the presidential compound that left him severely burned.

But even during his treatments -- which included eight surgeries -- Saleh was under pressure to embrace a political transition plan developed by the Gulf Cooperation Council that included plans for him to step down, following months of widening anti-government protests and sentiment in his country.

Thari said a massive celebration is being planned for the president's homecoming, and that Saleh will decide upon his return "what is best for Yemen and the ruling party."

Officials in Sanaa have rejected calls for Saleh to leave office, saying that no power has the authority to force Saleh to step down.

"No one will lead the ruling party, only Saleh. He is the constitutional president and unless he steps down willingly, the Yemeni people will support him to the last man," said Abdu al-Ganadi, the government's spokesman.

Saleh has voiced agreement with the plan, which would ensure his gradual departure from office, but he has not signed it. Saleh told Brennan that the GCC initiative laid the groundwork for exiting the political crisis through national dialogue involving all political parties, Yemen's state-run Saba news agency reported.

Ahmed Bahri, head of the political department at the opposition Haq party, said the United States was not doing enough and that they are forcing the people of Yemen to use force in order to have their demands met. "The Yemeni revolution vowed to stay peaceful, but now is the time to review that stance. The use of force might be needed to oust the Saleh regime from power," said Bahri.

Pro-democracy activists said that if Saleh is allowed to come back to Yemen, it would reveal the amount of hatred the United States and Saudi Arabia have for the youth revolutionists. "The United States always said they supported the youth in Yemen, but we are coming to know that that is not true," said Waseen Qirshi, the spokesman for the revolution youth organizing committee.