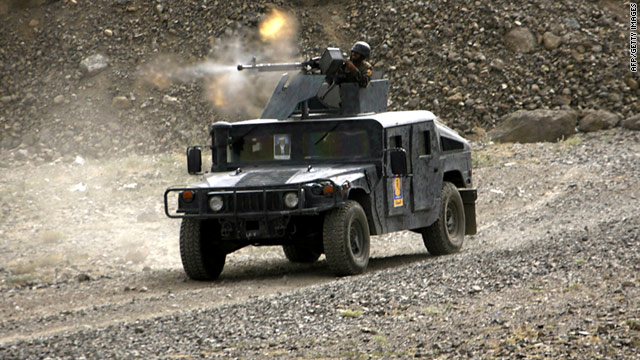 A Yemeni soldier fires as he is drilled during exercises in counter-terrorism near Sanaa on July 11.
STORY HIGHLIGHTS
RELATED TOPICS

Hundreds of tribesmen joined the fight in the town of Zinjibar, vowing to stand strong until Islamic militants leave Abyan province.

"We will not stop until the terrorists leave the province. We will fight and have nothing to lose," said Masood Mansoor, one of the fighters. "This land is ours and we will not allow it to be a safe haven from outlaws."

Government troops have been battling both anti-government tribal forces and Islamic militants, including al Qaeda in the Arabian Peninsula.

A senior security official in Zinjibar said the clashes began Saturday night and were the fiercest yet in the weeks-long fight against the militants. The official, who asked not to be named because he was not authorized to speak to the media, said several militants were killed our wounded, but couldn't give exact numbers.

"The clashes are nonstop and the forces are surrounding the militants from all directions," the official said.

The United States has been aiding Yemen's military in its fight against Islamic militants amid fears that al Qaeda is exploiting the political chaos and leadership vacuum engulfing the unstable and impoverished Arabian Peninsula country.

Widespread tumult has engulfed Yemen for months, with thousands of demonstrators who oppose the rule of Ali Abdullah Saleh urging the president's departure. Saleh went to Saudi Arabia for treatment after injuries suffered in an attack on his compound.

Government spokesman Abdu Ganadi said Saturday that all Yemenis should put their differences aside and focus on one enemy, referring to the suspected al Qaeda militants.

Ganadi said that the government will do all it can to fight terror in the country and called on the international community to support Yemen against the militants.