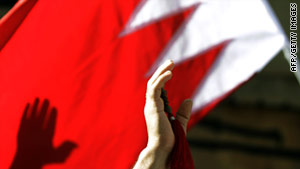 Bahrain has been riven by months of pro-democracy demonstrations and violent responses by government forces.
STORY HIGHLIGHTS
RELATED TOPICS

The dialogue has been going on since the beginning of July and is intended to focus on reform, with the aim of reaching consensus on how to achieve it.

On its website, Al-Wefaq presented several reasons for pulling out, including that the talks are "not serious" and they do not create a "political solution" for the problems Bahrain faces.

"We feel that our participation is being taken advantage of in order to distort the meaning of national dialogue and national consensus," the group. "This will exacerbate the political impasse and our presence is being used to pass pre-planned results."

Al-Wefaq's website showed figures from the last election that indicate they have the votes and support of 64% of Bahrainis, but they only make up 1.6% of the dialogue group.

Representatives from the group made similar claims earlier this month, when Al-Wefaq's representatives partially withdrew from some workshops that were part of the dialogue.

"It must be noted that the authorities designed the dialogue so that all opposing views are diluted," Hadi al-Mosawi, an Al-Wefaq representative, told CNN at the time. Only about 35 of the 300 participants represented the opposition, and the agenda "has been set so that it is directed towards a pre-determined outcome," he said.

Al-Wefaq and other opposition parties have been experiencing increasing pressure from their members to pull out of the talks altogether. The February 14 Movement, which comprises activists on Facebook and Twitter, staged a protest in early July in Bilad al-Qadeem, south of the capital.

Both Al-Wefaq and the leftist Waad party were among groups invited to the capital, Manama, for talks intended to calm the political turmoil that has rocked the Persian Gulf nation.

The U.S. had welcomed Al-Wefaq's decision to join the talks. U.S. State Department spokesman Mark Toner called the party "an important voice (in) a process that has the potential to serve as a vehicle for reform and reconciliation."

Bahrain is a strategically important nation to the United States, and home to the U.S. Navy's 5th Fleet. It has been riven by five months of pro-democracy demonstrations and violent responses by government forces.