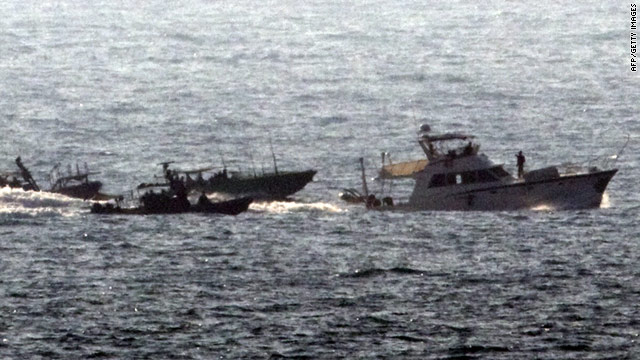 (CNN) -- Fifteen foreigners aboard the Gaza-bound boat Dignite were being deported out of Israel on Wednesday, Israeli officials said.

"Some of them have already left this morning and the rest will fly out during the day," said Sabin Hadad, spokeswoman for the Israeli interior ministry.

One of the journalists is Israeli.

Israeli naval forces Tuesday successfully took over the boat, which was intent on breaking what the activists call the "siege of Gaza," without violent resistance.

The forces "operated in line with procedures and took every precaution necessary while using all operational tactics determined prior to the operation, and avoid causing harm to the activists on board while ensuring the safety of the soldiers," the Israel Defense Forces said.

After the boarding, "the passengers' health was examined and they were offered food and beverages."

The boat declared its destination as Alexandria, Egypt, so that it could leave Greek waters, said Greta Berlin, spokeswoman for the Free Gaza Movement.

But it changed its destination in international waters, which is legal, Berlin said.

Israel insists on controlling access to Gaza because it says it has to keep weapons out of the hands of Palestinian militants who would use them to attack Israelis.

Gaza is run by Hamas, which has carried out dozens of terrorist attacks and is listed by the United States as a terrorist organization.

Israel emphasizes that it delivers large amounts of aid to Gaza. The country mounted a diplomatic offensive to try to stop the flotilla from setting sail.

The ship was part of a group of vessels that had planned to sail to Gaza in an effort to promote public awareness about Israel's blockade of the area. The others were grounded in Greece.

The activists connected with the Freedom Flotilla, as they call it, also wanted to commemorate a May 2010 incident in which Israeli troops boarded the Mavi Marmara, a Turkish ship filled with humanitarian aid and 700 activists from various countries. Nine people died in clashes with Israeli Navy commandos.

"The Dignite carries a message of solidarity and human empathy from the people of the world to the people of Gaza, and all of Palestine, that Israel's violence can never silence," the group said.