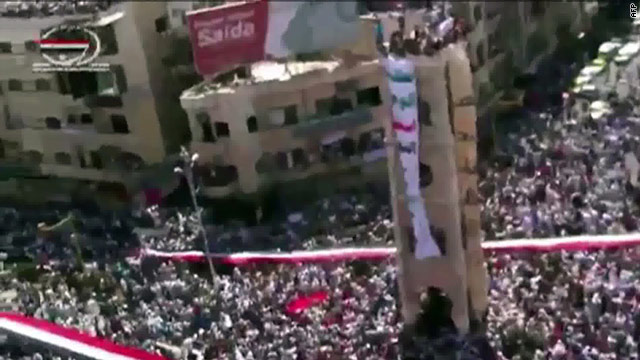 An image grab from an internet video, shows an anti-government demonstration in Hama, Syria on July 22, 2011.
STORY HIGHLIGHTS
RELATED TOPICS

(CNN) -- Clashes in Syria's streets have led to the deaths of 11 civilians since Friday, according to Local Coordination Committees of Syria, a dissident group.

The organization said the deaths came during the violent government crackdown on protests that have sprung up in various cities including Aleppo, Deir Azzor, Daeel and Douma.

CNN cannot independently verify the claim, and a government response was not immediately available.

Government officials blamed the some of the violence on "terrorists," according to the state-run Syrian Arab News Agency (SANA). SANA reported Tuesday that the "terrorists" killed three security officials and two civilians.

The dissident group said there have been mass arrests by the government in an attempt to quell protests.

But protests have continued, according to videos posted on YouTube, which purports to show large crowds of women gathering in various cities Monday night calling for the release of detained family members. Another video shows a funeral Tuesday of a person allegedly killed by security forces.

CNN cannot verify the authenticity of those videos.

The unrest in Syria began in mid-March after teens were arrested for writing anti-government graffiti in the southern city of Daraa, according to Amnesty International.

As the clashes intensified, demonstrators changed their demands, from calls for freedom and an end to abuses by the security forces to calls for the regime's overthrow.

The United States released a strongly worded statement Monday condemning the ongoing violence in Syria and accusing the government of targeting civilians.

"The behavior of Syria's security forces, including other such barbaric shootings, wide-scale arrests of young men and boys, brutal torture, and other abuses of basic human rights, is reprehensible," the U.S. State Department statement said. "President (Bashar al-) Assad must understand that he is not indispensable, and we believe he is the cause of Syria's instability, not the key to its stability."