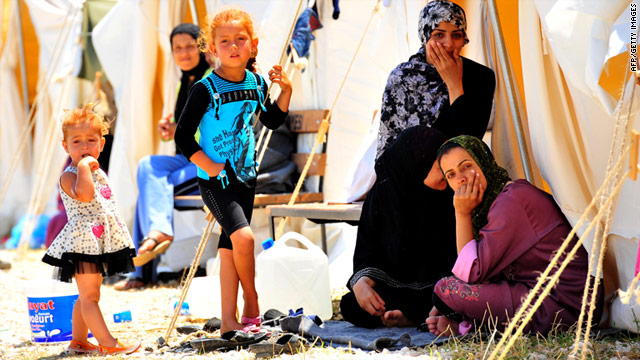 Syrian refugees sit in front of their tents on June 18 in the southern part of Turkey.
STORY HIGHLIGHTS

(CNN) -- Approximately 200 Syrian opposition activists met Wednesday in Istanbul for the first of four planned days of workshops intended to coordinate their efforts against the Syrian regime.

"This will be the seed for future civil society institutions and movements in Syria," said Moaz Al-Sibaai, the meeting's general coordinator. He said the goal is "to improve ways to deliver our message to the outside world, ways of documenting human rights violations in Syria and giving coherent political messages."

The gathering, organized by Syrian Activists Network, is taking place in a hotel on the Asian side of the city.

During the rest of the conference, the participants will attend training sessions and workshops on subjects related to human rights, media, political and strategic issues, as well as relief and coordination efforts. They will work to improve their skills in areas such as how to collect and document evidence, how to deal with the news media, how to build effective work teams and how to provide relief for displaced people.

On Wednesday, the attendees consisted mostly of young adults, some of them from Syria. At the venue, their general mood was enthusiastic, with many expressing optimism they will achieve their goals.

One young female activist, who comes from a long line of Syrian dissidents, said she was thankful for the opportunities presented at the gathering. "I want to attend the media course, I might attend the charity one, but I would be more than happy to join any of them," she said.

Syrian opposition groups have held a number of meetings in Turkey in recent months. The last one, organized by the Syrian National Salvation Council, took place mid-July in Istanbul. Participants elected a 25-member council in a show of unity behind their intention to oust the regime of President Bashar al-Assad.

"It is not about toppling the regime, we are past that," said Sima Abedraboh, an organizer and participant at Wednesday's event. "We are building here, thinking about the future of Syria."

She predicted this week's sessions would mark the first of what will become a series of such courses for Syrian activists.

Syria has been wracked by violent government crackdowns on protests across the country since mid-March, when teens were arrested for writing anti-government graffiti in the southern city of Daraa. As the clashes intensified, demonstrators changed their demands, from calls for freedom and an end to abuses by the security forces to calls for the regime's overthrow.

World powers have criticized the crackdown by al-Assad's government. The U.S. State Department this week said al-Assad is the "cause" of the country's "instability" and is not "the key to its stability."