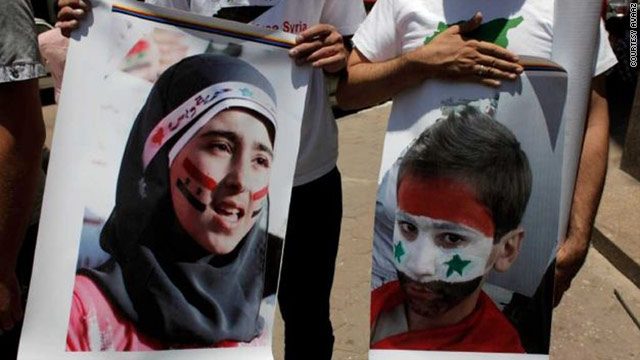 Protesters outside the Syrian embassy in Cairo call for the release of the country's "disappeared."
STORY HIGHLIGHTS

(CNN) -- A 14-year-old male student last seen two months ago being beaten and dragged into a white van by Syrian security forces; a 13-year-old boy arrested with his friends and bleeding badly from his ears, nose and mouth when they last saw him; a mother who says her two youngest sons were arrested but the security forces claim no knowledge.

These are just a few examples of Syria's "disappeared," provided by global campaign group Avaaz, which claims that nearly 3,000 Syrians have been arrested by the government's security forces since the start of the uprising on March 15, whose whereabouts remain unknown.

"We have 2,918 names and each of them has a different story," said Wissam Tarif, a human rights activist working for Avaaz, who coordinated the organization's research in Syria.

The group launched a campaign Thursday to draw international attention to the enforced disappearances. It includes a wall of profiles on Avaaz.org of missing people.

Families don't know if their children are alive or dead; if they are being tortured.
--Wissam Tarif, researcher, Avaaz

"Some were kidnapped during protests; some from their schools or universities; some wrote something; some were detained by security forces in raids on their homes.

"They were all involved in the pro-democracy movement in some way: Some went to protests; some wrote something they shouldn't on their Facebook page; some said something to a colleague and were reported," said Tarif.

One mother's three sons, aged 27, 22 and 14 were all taken, says Tarif recounting one case. The oldest was released after 10 days, but when she asked about her two other sons, the security forces claimed they had not taken them.

"They are doing this because the oldest brother, who had been active in protests, is now too scared to go to protests. He thinks that if his younger brothers are still alive, (the security services) will kill them.

"Forced disappearances are so scary because the community lives in total fear. Families don't know if their children are alive or dead; if they are being tortured. It's the unknown that's so hard," said Tarif.

Website profiles will include the person's name, age, job, where they lived and details of their disappearance -- a calculated risk, says Avaaz, taken in conjunction with victims' families, who cite safety in numbers.

Because of the implications for their families, Avaaz says it will not give names in any individual cases it highlights in the media.

The Syrians need to realize this is not the 1980s anymore and that you cannot disappear people and get away with it
--Nadim Houry, Syria researcher, Human Rights Watch

Avaaz says that researchers spoke to the families of every one of the 2,918 missing people profiled. The organization allows the family to guide it on how much information they release about their identity.

"We have a strong team of international lawyers and people with deep experience in Syria that have worked closely with two leading Syrian human rights organizations ... to verify each and every one of these cases," said Avaaz Executive Director, Ricken Patel.

He says that Avaaz will remain in continuous contact with its networks in Syria to keep the website profiles updated with those released and new disappearances.

Patel claims that Avaaz, which he says supports over 60 citizen journalists in Syria, is the only organization currently doing this kind of research there.

"Part of the problem in Syria right now is that the government isn't allowing in any international journalists, any foreign human rights organizations ... so we are having to rely on Syrians themselves and the families of these people to tell us what is happening."

Nadim Houry, Senior Researcher for Syria for Human Rights Watch said Syria's government has a history of detaining people and holding them incommunicado.

"There are already an estimated 17,000 people who disappeared in the events around Hama in 1982," he said.

Under the orders of current president Bashir al-Assad's father, Hafez Al-Assad, the Syrian army brutally crushed an uprising by Sunni Muslims in Hama. Tens of thousands of people were killed, with estimates ranging between 10,000 and 40,000.

The international community has yet to bring the kind of pressure on Syria that can stop these kinds of atrocities
--Ricken Patel, Executive Director, Avaaz
RELATED TOPICS

"What's important is that the Syrians need to realize this is not the 1980s anymore and that you cannot disappear people and get away with it," said Houry.

"Today the information will be documented and those committing these crimes will have to be held accountable."

In June, human rights group Human Rights Watch released a report detailing government abuses against its citizens that could possibly qualify as crimes against humanity.

Later that month, a delegation of human rights organizations and their lawyers met with prosecutors at the International Criminal Court in the Netherlands. They alleged that government forces have killed more than 1,168 people and injured 3,000 more since March.

Avaaz is calling on its 10 million members worldwide to call on key governments with influence in Syria -- South Africa, India, Brazil, Kuwait and Qatar -- to send human rights delegations to pressure the Syrian government to release the disappeared.