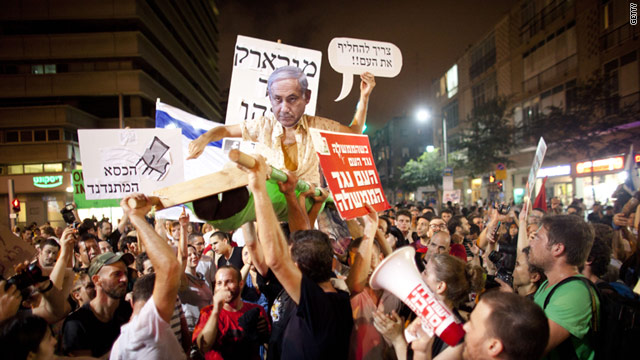 Tel Aviv, Israel (CNN) -- Israeli Prime Minister Benjamin Netanyahu announced Sunday he will gather a round table to form a plan aimed at easing the financial burden on Israeli citizens in the wake of protests across the country.

Netanyahu said he will invite representatives of various groups and sectors to join a special ministerial team that will propose a "practical plan to alleviate Israelis' economic burden" and come up with solutions.

Tens of thousands of Israelis took to the streets Saturday night in ten major cities to rail against soaring costs to the middle class in the Jewish state. The ongoing campaign is the latest and most extensive civil protest in recent years.

Activists have set up tent cities across the country to demand affordable housing and protest against what they describe as social injustice.

"I think it's about time to say, 'Enough,'" protester Liran Gurbacha told CNN. "They open too many doors for rich people to make their own rules, to take our money to get richer. This is a democracy, it should act like that."

Hundreds of police have been deployed nationwide related to the demonstrations.

Having failed to ease the public pressure and gain support for his recently announced plan to increase the number of affordable homes, Netanyahu vowed to "appoint a special team of ministers and experts that will propose a responsible and practical plan to alleviate Israelis' economic burden."

In his speech at the start of Sunday's weekly cabinet meeting, the prime minister called for calculated measures that would not jeopardize Israel's growing economy. "We must avoid irresponsible, hasty and populist steps that are liable to cause the country to deteriorate into the situation of certain European countries, which are on the verge of bankruptcy and large-scale unemployment. I do not think that anyone wants Israel to reach such a situation."

The prime minister agreed with activists' claims that imbalances in the Israeli economy are contributing to the hardships.

"We are all aware of the genuine hardship of the cost-of-living in Israel," he said. "This affects many areas. Some of the claims that are being heard are justified and some are not. We are obligated to deal with the genuine claims and distress. Some of them are the result of distortions in the Israeli economy that have taken root here over many long years."

Meanwhile, Finance Minister Yuval Steinitz, who took much of the heat for soaring prices, faces administrative difficulties within his office. Finance ministry director general Haim Shani announced his resignation Sunday morning, citing professional disagreements with the minister. "I, as a finance minister, have a responsibility for Israel to not fall into financial anarchy. We must not abandon the principals of our economy," Steinitz said Sunday.

Israeli President Shimon Peres also expressed his will to serve as mediator between the activists and the government Sunday. "The president's residence is open and attentive to the needs of the people. It is my role as a president to listen to the distress and see how I can as a president assist the citizens and the future of the state of Israel," Peres said in his meeting with Israeli doctors who are also striking as part of their quest to push for reforms in the health system, including improved wages.

Saturday's protests were the latest and largest in a series of organized demonstrations, led by members of Israel's middle class, over the high cost of living.

"When we were young and we left the kibbutz, we had nothing, but we had hope," said Miri Gilat. "Now the young people don't have any hope, and I cannot help them."