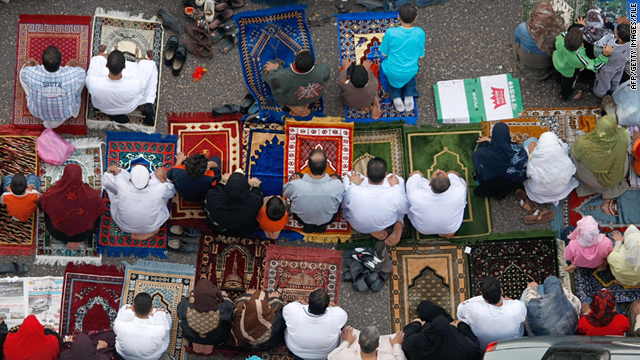 (CNN) -- Muslims around the world on Monday ushered in Ramadan, a month of dawn-to-dusk abstinence from food and drinks.

But this year, the unrest in the Middle East and North Africa has cast a pall over what is traditionally a period of comity and goodwill toward men.

Several countries in the region have been swept up in protests against longtime rulers since the January revolt that ousted Tunisian strongman Zine El Abidine Ben Ali.

In many cases, these demonstrations and movements have been met with brute force that has escalated into seemingly unending violence.

Most anti-government demonstrations have taken place after prayers, with the masses taking to the streets after meeting at mosques.

The month, which brings more Muslims to mosques, has some governments worrying that the gatherings will provide more opportunities for such protests -- and demonstrators fearing that security forces will crack down forcefully to prevent them.

The throngs of pro-democracy activists who have camped out on Cairo's Tahrir Square will take a break during Ramadan.

Once the month ends, the thousands of disgruntled demonstrators said they will return to the square, which was the hub of the uprising that toppled former President Hosni Mubarak earlier this year.

The protesters have packed the iconic roundabout since July 8 frustrated by what they see as the slow pace of change.

They are demanding speedy trials of police officers accused of killing protesters in the demonstrations that ousted Mubarak, the end of military tribunals, the abolition of the emergency law, and economic reforms such as the establishment of a minimum wage.

In a speech marking the start of Ramadan, Yemen's President Ali Abdullah Saleh reiterated that the only way out of the country's current crisis is through a national dialogue.

"We stress on this occasion that all political movements should adhere to the Gulf Cooperation Council initiative and efforts exerted by the (UN) security council as basis to resolve the crisis facing the nation," Saleh said from his hospital bed in Riyadh, Saudi Arabia, where he is recuperating from an attack on his presidential compound on June 2 that left him with serious burns.

His remarks were carried by the official SABA news agency.

Inspired by the revolution in Egypt, demonstrators began protesting Saleh's 33-year-old regime on February 11. A month later, Saleh offered to draft a new constitution that would establish a parliamentary system, but protesters persisted in calling for his resignation, and numerous high-ranking political and military officials resigned or were dismissed.

Saleh balked after making overtures to accept an agreement with the Gulf Cooperation Council to step down, and fighting has escalated between security forces and opposition groups -- primarily tribal forces and Islamic militants -- since those efforts broke down in May.

Officials in Tripoli have been preparing for what they say will be a bloody Ramadan as a civil war grinds on in the North African nation.

At a recent gathering in support of Libyan leader Moammar Gadhafi, a Muslim cleric told CNN that loyalist troops would be authorized to break their daytime fasts to fight on the front lines.

"Those who are fasting, if they get thirsty they should break their fast. (Because) those who are fighting are Mujahedeen (holy warriors)," said Mohammed Madani Chouairef. "Everyone standing up to this sedition is a Mujahed except for those who are with NATO."

Protests in Libya started in February, when demonstrators, fed up with delays, broke into a housing project the government was building and occupied it. They quickly gained strength, and a movement to demand democracy and oust Moammar Gadhafi after more than four decades in power exploded into civil war. NATO began airstrikes in March under a U.N. Security Council mandate to protect civilians.

It is unclear that planned protests in the Syrian capital on Monday will proceed, a day after Syrian tanks stormed the flashpoint city of Hama in one of several clashes that rights groups said left more than 70 people dead and more than 100 injured nationwide.

"The attack appears to be part of a coordinated effort across a number of towns in Syria to deter the Syrian people from protesting in advance of Ramadan," said British Foreign Secretary William Hague. "The attacks are all the more shocking on the eve of the Muslim holy month."

The raid marks the latest violence as anti-government protesters in the nation have called for a new regime since mid-March.

Activists blame the deaths of civilians in demonstrations on security forces, but the government has consistently attributed the violence to "armed groups."

With NATO forces coming under increased attacks in Afghanistan in recent weeks, the top U.S. commander in the country said Sunday it was hard to tell if the pace would continue during Ramadan.

"It's hard to predict what's going to happen," Adm. Mike Mullen told reporters in Kabul. "I have no idea whether violence or attacks will go up or down.

Mullen said the United States has "great regard and respect for this month" but we "have to assure that our forces are protected and we'll see what the enemy does. That probably will drive what happens over the course of the next month."

About 150,000 International Security Assistance Force members are currently deployed in Afghanistan, which includes fewer than 100,000 from the United States. Ten thousand American soldiers are scheduled to leave the country by the year's end

Seven areas are being handed over to national security forces in what is the first part of a security transition to Afghan control.

CNN's Amir Ahmed in Atlanta; Ivan Watson and Jomana Karadsheh in Tripoli, Libya; and David Ariosto in Kabul, Afghanistan, contributed to this report.