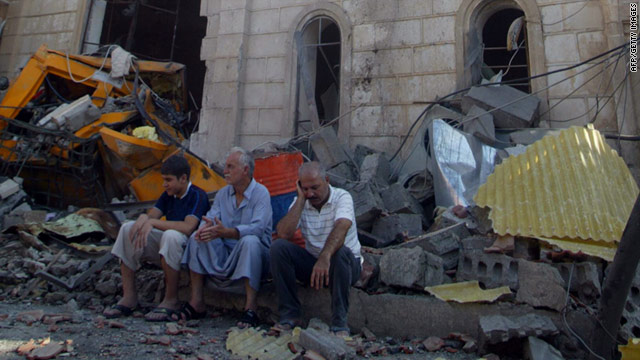 Iraqis sit outside the Holy Family church in the north of Kirkuk after a car bomb exploded wounding at least 20 people.
STORY HIGHLIGHTS
RELATED TOPICS

The attack took place in Kirkuk's Shatterlo neighborhood around 5:30 a.m. (10:30 p.m. Monday ET), according to a police official who spoke to CNN on condition of anonymity because he was not authorized to speak to the media.

The wounded included staff from the Holy Family Church and people with homes nearby.

The explosion damaged the church and a number of nearby houses, police said. Kirkuk is an ethnically divided city located about 240 kilometers (150 miles) north of Baghdad.

In the past years, extremists have carried out major attacks against churches.

An October 31 attack on the Sayidat al-Nejat Cathedral, or Our Lady of Salvation Church, left 70 people dead and 75 wounded, including 51 congregants and two priests.

The Islamic State of Iraq, an umbrella group that includes a number of Sunni Muslim extremist organizations and has ties to al Qaeda in Iraq, claimed responsibility for the Baghdad church siege.

Religious minorities, such as Christians and Yazidis, make up less than 5% of Iraq's population, according to the U.N. High Commissioner for Refugees.

Since 2003, attacks against these minorities by insurgents and religious extremists have driven more than half of the minorities out of the country, according to UNHCR statistics.