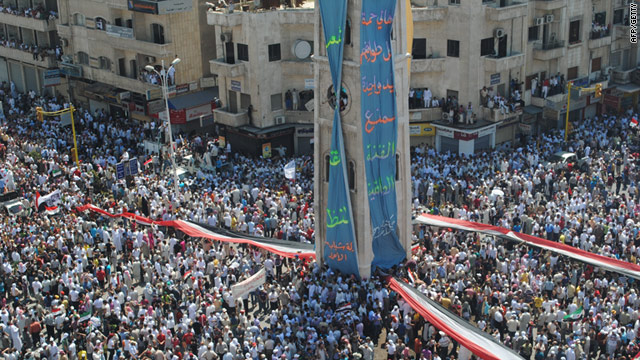 Thousands of Syrians demonstrate against the government after Friday prayers in the besieged city of Hama on July 29, 2011.
STORY HIGHLIGHTS

(CNN) -- The Syrian city of Hama has an ancient past as part of the Roman, Greek and Byzantine empires, but recent deadly violence has revived memories of its more recent history as a hotbed of unrest and brutal government crackdown.

At least 62 people have died in Hama since Sunday as the government of President Bashar al-Assad attempts to quell the last major bastion of a country-wide rebellion triggered by the Arab Spring that has swept North Africa and the Middle East.

For many, the latest bloodshed reopens wounds of 30 years ago when thousands were killed in a month-long battle as the Syrian army, under orders of then president, Hafez al-Assad, father of the current leader, crushed an uprising by Islamists.

Though separated by three decades, the current and previous crackdowns cement Hama's reputation as a city of rebelliousness and anti-government sentiment, says Robert Fisk, the only journalist to witness fighting there in 1982.

Hama resident: 'There is a slaughtering'

"Of all the places in Syria, this is where [anti-government] resistance has always been the strongest. Once a city acquires a reputation as a hub of rebelliousness it tends to stick," Fisk said.

Located 200 kilometers north of the capital Damascus and famous for its giant 15th century Byzantine-era norias, or waterwheels, Hama has been the location of some of the biggest protests since Syria's uprising began in March.

The strength of opposition -- which the government blames on extremist groups -- has prompted a succession of brutal crackdowns involving government troops and tanks.

But the city of 1.5 million's reputation as a modern epicenter of anti-government sentiment stretches back several years before the events of 1982.

In February 1982 Syrian government troops moved into Hama to crush the uprising, killing thousands of people. Many parts of the old city were reduced to rubble by heavy shelling.

"There were rows of tanks in the center of Hama shelling the Great Mosque, there were shells going off every 15 to 20 seconds, pounding the old city," Fisk says.

"There were bandaged, exhausted soldiers everywhere, which was an indication of the ferocity of the fighting."

A generation on, the past resonates strongly among demonstrators in Hama chanting for the overthrow of the current president.

Umm Yasseen, 62, is still haunted by the memory of her teenage son being shot dead on her doorstep in 1982.

"I started screaming and the Alawite officer who grabbed me said 'Your son is a criminal. He killed himself.' I can never forget his face ever, ever, ever," she told Reuters.com.

The death toll in Syria since its uprising began in mid-March has reached 1,992, according to Rami Abdul-Rahman, head of the London-based Syrian Observatory for Human Rights. He said the dead include 1,618 civilians and 374 Syrian security forces.

Syrian state-run media reported Tuesday that "armed groups" were behind an assault in Hama on Monday.

Amnesty International is calling on the Security Council to "urgently respond to the ongoing crackdown in Syria by referring the situation to the International Criminal Court."