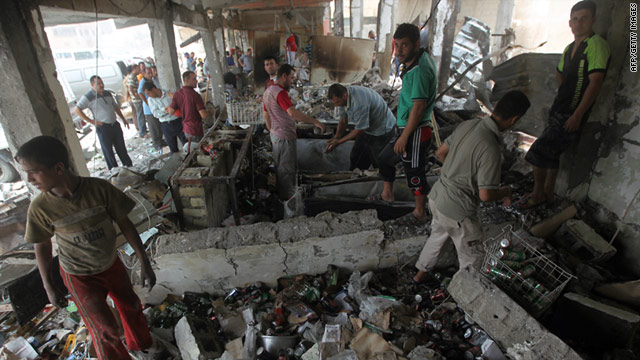 Iraqis walk through the rubble of a liquor store that was targeted in a car bomb attack in Baghdad on July 28, 2011.
STORY HIGHLIGHTS
RELATED TOPICS

"The human rights situation throughout Iraq remains fragile as the country slowly transitions from a conflict to post-conflict country that faces enormous development challenges that the Government and people of Iraq must now address," the report's authors wrote. "Widespread poverty, economic stagnation, lack of opportunities, environmental degradation and an absence of basic services constitute 'silent' human rights violations that affect large sectors of the population."

Much of the concern over human rights involved armed insurgent or terrorist groups, according to the report. The U.N. mission said the 2,953 civilian deaths it attributed to armed conflict in 2010 came largely at the hands of insurgent and terrorist groups. It said minorities, women and children suffered disproportionately.

Defendants are frequently not told what they are charged with, have no access to lawyers and are held longer than legally allowed without trial, according to the report.

"The judicial system also remains weak -- and an over reliance on confessions, rather than on properly gathered forensic evidence, to convict encourage an environment where torture of detainees takes place," the report's authors wrote.

In April, the U.S. State Department released a report with similar findings, saying violence, corruption and organizational failings among government agencies, as well as actions by violent extremist groups, were contributing to significant human rights problems.