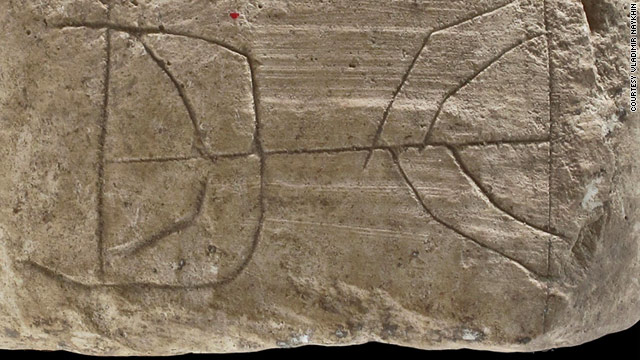 The stone artifact with an etching of the Menorah was probably done by a sharp nail.
STORY HIGHLIGHTS
RELATED TOPICS

Jerusalem (CNN) -- Israel's Antiquities Authority announced Monday that a rare Roman sword in its leather scabbard which belonged to a Roman soldier and an engraving of a Menorah on a piece of stone dating from 66 CE were found in recent days in the 2000 year old drainage system in Jerusalem which ran between the City of David and the Jerusalem Archaeological Garden.

Professor Ronny Reich told CNN that the sword probably belonged to a Roman infantryman stationed in Jerusalem during the Great Revolt (66 CE). At the time there were four Roman legions stationed in the area. This is the third Roman sword found in Jerusalem but what distinguishes this find is the fine state of preservation of the sword: it is around 60 cm (about 24 inches) in length, it was found in a leather scabbard and some of the decoration on the sword was preserved.

The stone artifact with an etching of the Menorah was found in the soil near the drainage channel. The etching was probably done by a sharp nail according to Reich. "The importance of the etching," according to Reich, "is the depiction of the base of the Menorah which clarifies what the original base of the Menorah looked like: a quadrapod resting on a frame that was on the floor." The proximity of the find to the Temple Mount is also important and the researchers of the dig Eli Shukron from the Israel Antiquities Authority and Reich believe a passerby who saw the Menorah with his own eyes drew his impression of it on a stone.

The Menorah was one of the holy objects inside the Temple.

The dig has uncovered so far half of the old drainage channel, which is around 600 meters (yards). In earlier digs the archaeologists found traces of people who lived in the drainage channels hiding from the Romans during the time of the Second Temple's destruction. The drainage channels were also used by people to flee the besieged city.

The find comes on the eve of Tisha B'Av which is a fast day in Judaism which commemorates the destruction of the First Temple and Second Temple in Jerusalem.