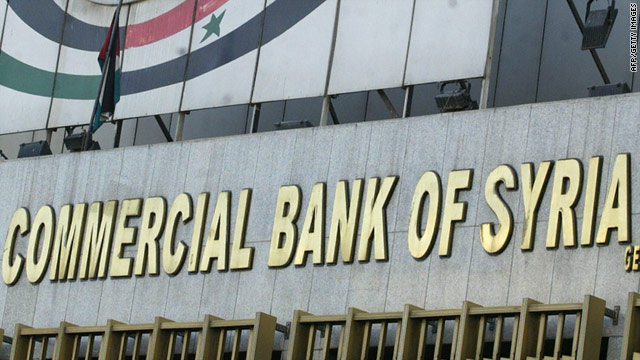 Sanctions have been been placed on Syrian companies including the Commercial Bank of Syria.
STORY HIGHLIGHTS
RELATED TOPICS

Washington (CNN) -- The United States has slapped sanctions on Syria's largest mobile phone operator and a Syrian bank and its Lebanese subsidiary.

The Treasury Department Wednesday announced the designation of mobile phone operator Syriatel, the Commercial Bank of Syria and the Syrian Lebanese Commercial Bank. It said Americans are "generally prohibited from engaging in commercial or financial transactions" with the companies.

Under-Secretary for Terrorism and Financial Intelligence David S. Cohen said the government is "taking aim" at the "financial infrastructure" of President Bashar al-Assad and his regime, criticized for cracking down on peaceful protesters over the last five months.

Cohen said Syria's largest bank was designated for providing financial services to Syria's Scientific Studies and Research Center and North Korea's Tanchon Commercial Bank. They have been cited before for their backing of weapons of mass destruction proliferation.

Tanchon is "the primary financial agent" for the Korea Mining Development Corporation, described as "North Korea's premier arms dealer and main exporter of goods and equipment related to ballistic missiles and conventional weapons."

Syriatel was designated for being owned or controlled by Rami Makhluf, "a powerful Syrian businessman and regime insider. A cousin and longtime confidant of al-Assad, he had been designated before "for improperly benefiting from and aiding the public corruption of Syrian regime officials."

And as international powers urged Syria to initiate serious reforms and stop its bloody crackdown against demonstrators, Makhluf recently announced that he plans to quit his business and go into charity work.

However, the Treasury Department noted Makhluf's majority ownership interest in the company.

"Despite attempts to obscure his controlling interest in Syriatel, Makhluf has continued to own and run the telecommunications company," Treasury said.