Saleh pledges to return to Yemen; at least 26 killed in clashes 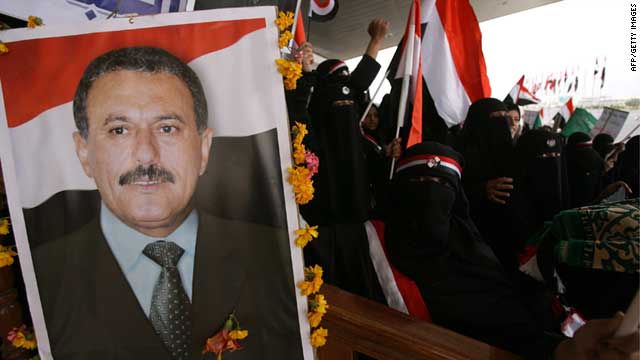 (CNN) -- On a day in which at least 26 people were killed in fighting between local tribes and government forces, President Ali Abdullah Saleh pledged to return to Yemen, and denounced the violence there as inspired by reactionary elements "who want to take the country back" to the days before its independence.

Saleh also said he is committed to holding elections, but not before 2013 as demanded by the opposition. He highlighted the government's plans for decentralizing power, which he characterized as an interim step to amending the constitution "to hold direct elections and give local authorities more power," according to a transcript of the speech provided by SABA, Yemen's state news agency.

"We must discuss all the available data, all the events in Yemen, and how to get our country out of the crisis -- the crisis which was fabricated by some political forces to reach power," Saleh said. "We welcome the opposition and tell them that you can reach power through ballot boxes, not through coups, statements, denunciation, insults or irresponsible speeches."

Saleh also warned the youth in the cities not to join up with opposition elements, which he scorned as "minor remnants of Marxists and secessionists," elements of the Taliban and those who want to reintroduce the rule of imams.

"We will meet your needs and we are ready to address them with a sense of national responsibility," Saleh said. "But those narrow-minded people who have hateful tribal culture have seized your project. This is not your culture; you have grown up against the backdrop of the revolution, republic and the Yemeni unity. But this culture is inherited from ancient eras."

The speech was recorded at Saleh's residence in Saudi Arabia -- where he went to undergo treatment for injuries he suffered in an attack on the presidential palace in early June -- and broadcast Tuesday to some 8,000 attendees at a tribal conference in Sanaa, Yemen's capital, SABA said.

Yemen has been beset for months by anti-government ferment, militant activity battles between government and tribal forces. The United States has been aiding Yemen's military in its fight against Islamic militants amid fears that al Qaeda is exploiting the political chaos and leadership vacuum engulfing the unstable and impoverished Arabian Peninsula country.

Fighting has been virtually nonstop for the past two months in the Arhab district, 40 kilometers (about 25 miles) northeast of Sanaa, after tribal leaders went against the government claiming that it killed four tribal members in an effort to create unrest in the district.

In the most recent bloodshed on Tuesday, witnesses said civilians comprised most of the dead from air attacks by the Republican Guard. At least 17 of the dead were children and women, they said, while only nine tribal fighters were among the killed.

At least a dozen fighters were injured, witnesses said.

"The government is fighting its own people using aircrafts and tanks to kill us," said Ahmed Abu Ghanem, a tribal leader in Arhab district.

The government insists it is attacking only outlaws and criminals.

"The government is fighting those who attack public property and (are) causing chaos in the area," said Abdu Ganadi, a Yemeni government representative.

The spokesman did not comment on the civilian death toll when asked by CNN.

Tribal fighters in Arhab said they have killed more than 16 Republican Guards over the past two days, claiming the government is hiding its death toll out of fear their troops would withdraw.

Eyewitnesses said they saw at least five damaged tanks on the roads leading to Arhab villages.

"The troops are killing civilians and families and not fighters. They cannot fight man to man," said Abdullah Mohammed, a tribal fighter in Arhab's Shaab village.

Most of the Arhab attacks were in Shaab village, where the government said "outlaws" took over governmental complexes and raided its military camps.