Attacks focus attention on Islamist extremists in Egypt -- and tunnels

By Mohamad Fadel Fahmy, for CNN 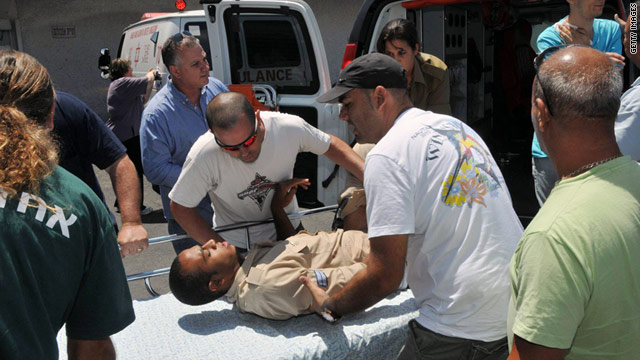 An Israeli soldier lies wounded on a stretcher after a series of gun and roadside bomb attacks near the Israeli-Egyptian border.
STORY HIGHLIGHTS
RELATED TOPICS

Rafah, Egypt (CNN) -- The attacks on Israeli civilians and soldiers Thursday have exposed the deteriorating security situation on the Egyptian side of the desert border, and the easy access to weapons in an area renowned for smuggling and lawlessness.

Israeli officials said Thursday that while intelligence suggested the attacks originated in Gaza, they reflect the weakening authority of the Egyptian state in Sinai. Israeli Defense Minister Ehud Barak noted the "expansion of the activity of terrorist forces" in Sinai.

Security analysts say it is highly unlikely that the assailants could have carried out the attacks so far from Gaza without using Egyptian soil. The assault on the bus occurred some 180 kilometers (about 112 miles) south of Gaza, near Eilat on the Red Sea.

Egyptian security forces are equally concerned about the situation in Sinai. This week, the military and police started an "anti-terror" operation in the northern Sinai, along the Mediterranean coast. The head of security there, Gen. Saleh al Masri, told CNN that the militant group Takfir-wal-Hijra had become active during the revolution that led to the ouster of President Hosni Mubarak. He said it had been involved in clashes in the resort town of El Arish last month that led to the deaths of seven people, including a policeman.

"The terrorists were joined by members of Palestinian factions, and they are currently being questioned by military intelligence. We arrested 12 assailants, including three Palestinians," al Masri said.

"Al Qaeda has been funding and recruiting cells in Sinai, including members of the Takfir-wal-Hijra, joined by Palestinians from the Islamic Army," according to Maj. Yaser Atia, an officer with Egyptian General Security.

Another byproduct of the freer movement has been a sharp downturn in the "tunnel business." For years, the best way to make a living on the Egypt-Gaza border was to go underground. Literally. Determined diggers have joined forces with smugglers to supply Gaza with everything from powdered milk to Mercedes.

"We would send 100 tons of cement a day per tunnel at $90 a ton," recalls Abu Mohamed, an Egyptian tunnel master in Rafah.

Ibrahim Al Meneai, a Bedouin from the Swarkeh tribe who owns one of five tunnels big enough to smuggle cars and big trucks brought in mainly from Libya and Jordan, spent $300,000 to build what he calls "turbo blockade busters."

"I made back the money I spent for the digging in one night," he says. "But my business has gone bad since Israel allowed cars (into Gaza) a few weeks ago."

The unwanted competition is made worse by higher taxes. "Hamas gets $1,000 tax on each car that goes through the tunnels. The buyer pays me $5,000 a car or around $8,000 for a big truck as tunnel rent money, in addition to the car's price, " Al Meneai told CNN.

Sitting at the entrance to one of his tunnels, Mohamed Younis says the number of tunnels now far outstrips demand for goods in Gaza. He says the Israeli authorities are allowing in more and better kinds of food from their side, further undercutting demand for Egyptian products.

Until the recent slowdown, the main commodities smuggled through the tunnels were fuel, cement, gravel (for construction) and metal sheeting. All transactions are in cash -- U.S. dollars only.

Younis, pouring tea for his friends and sons, recalls the first tunnel he used in 1984. "The tunnel back then was so small we only had a string or rope that was brought through to the other side tied to a cat."

"In 1993 we built the first tunnel wide enough to smuggle a man, but he would have to crawl through, and it was hard to breathe," he said.

The business took off after September 2000, following the outbreak of the second Palestinian Intifada, or uprising, against the Israeli occupation. Then, the focus was on weapons and ammunition. But as the Intifada petered out, food, consumer goods, electronics and livestock became the stock in trade.

And as volume grew, the tunnels were transformed. Today, many have ventilation and lighting systems, and some even have mobile phone network boosters that allow for the use of cell phones.

"We have built the Gaza Zoo," boasts Al Meneai. "I brought in a baby elephant, a monkey and a tiger. But now I smuggle people."

"I get $50 per person, but I have to coordinate with Hamas on the other side," he says. "I make sure they are not suicide bombers or have plans to kidnap foreign tourists (in the Sinai)."

In the border area, the smuggling business is by far the biggest employer. But it has its risks. Dozens have died in tunnel collapses over the years, and Israeli warplanes regularly bomb tunnels that Israel suspects are being used to smuggle weaponry.

The Egyptian government has been aware of this ongoing illegal trade for decades, and officials are widely believed to have profited handsomely from the business.

Officially, however, they are doing their best to crack down.

"The tunnels remain our biggest challenge," says Gen. al Masri, head of security in Northern Sinai. "We announce to the public every time we destroy the tunnels we locate, but the situation is far more complicated than that."

Now, al Masri and his colleagues have something else to worry about: the use of Egyptian soil by Islamist extremists to recruit, train, acquire arms and take the fight to Israel.