By the CNN Wire Service 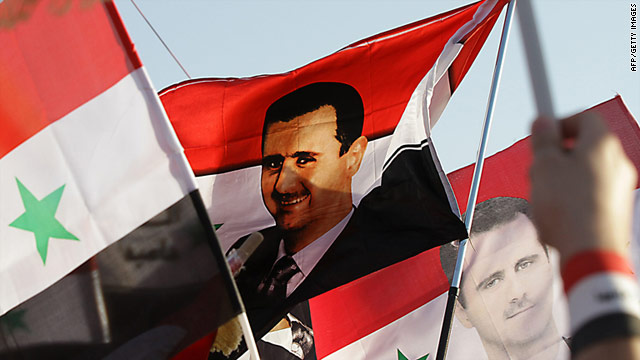 Russia says the Syrian President Bashar al-Assad should be given time to implement reforms.
STORY HIGHLIGHTS

The move by Russia counters efforts by leaders ratcheting up international pressure against a regime criticized for its brutal crackdown against protesters calling for reforms and the ouster of al-Assad.

"We do not support such calls, and we think that President al-Assad should be given time today to implement all of the declared reform processes," a Russian Foreign Ministry official told the nation's Interfax news agency.

The White House has previously said al-Assad had "lost legitimacy," but resisted calling explicitly for his ouster until now.

"The future of Syria must be determined by its people, but President Bashar al-Assad is standing in their way," President Barack Obama said in a statement Thursday. "We have consistently said that President Assad must lead a democratic transition or get out of the way. He has not led. For the sake of the Syrian people, the time has come for President Assad to step aside."

Inside the uprising in Syria

The leaders of Canada, France, Germany, the United Kingdom and the European Union echoed Obama's demand.

The refusal by Russia to go along with U.S. and European leaders' calls is a departure from its stance in June when Prime Minister Vladimir Putin criticized the crackdown and called for pressure to be put on Syria to stop the violence.

The Russian Foreign Ministry official, according to Interfax, said "what counts most is al-Assad's statement yesterday that they are stopping all military operations."

During a telephone call with U.N. Secretary-General Ban Ki-moon, al-Assad said military operations in the country had been halted.

Opposition protesters have refuted the claim, saying security forces have been arresting people and setting up checkpoints in and around cities.

Russia also was encouraged with Syria's agreement to accept a humanitarian mission from the United Nations into the country to look for the effects of the months-long military crackdown on anti-government protesters, the official told Interfax.

The humanitarian mission will travel to Syria on Saturday, and spend three to four days in the country, the United Nations said.

Syrian Ambassador Bashar Ja'afari said al-Assad has issued 20 reforms since March that will lead toward democracy by the end of the year.

"This is, after all, what the peaceful demonstrators are calling for," he said

The Foreign Ministry official, according to Interfax, said al-Assad has taken steps to implement a number of reforms, such as the adoption of "appropriate laws," the announced amnesty for political prisoners and readiness to hold general elections before the end of the year.

Senior U.S. officials, diplomats and members of the Syrian opposition have argued that the next several weeks will be critical in terms of isolating al-Assad, strengthening sanctions against the regime and bolstering domestic opponents of the regime.

The campaign against Syria's leadership, involving intense diplomatic outreach by Secretary of State Hillary Clinton and Obama, has been based on the one the United States used in Libya, where the U.S. administration built international consensus for the NATO mission to protect civilians.

U.S. and European authorities remain opposed to any military intervention in Syria -- a sharp contrast to their response to regime-sponsored violence in Libya.

"I don't think anybody believes that is the desired course of action on Syria," one senior administration official said Thursday.

Russia also has threatened to veto any U.N. Security Council resolution condemning Syria that opens the door to international intervention.

Several Middle Eastern countries with traditionally close ties to Syria, including Turkey and Saudi Arabia, have been consulted in recent weeks, according to senior administration officials.

Meanwhile, a U.N. fact-finding mission announced Thursday it has found Syria guilty of multiple human rights violations, and indicated it may be time for the International Criminal Court to become involved.

"The mission found a pattern of human rights violations that constitutes widespread or systematic attacks against the civilian population, which may amount to crimes against humanity," the report said.

France and other European countries are pushing for a Security Council resolution condemning the al-Assad regime, but they are still facing stiff resistance from Russia, China, Brazil, India and South Africa.

The United States is pushing for special session on Syria at the U.N. Human Rights Council in Switzerland as early as next week.