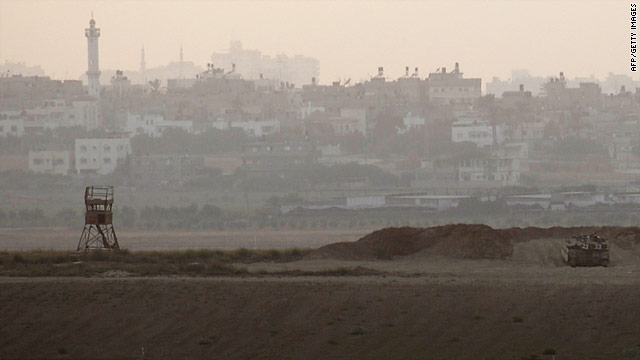 An Israeli tank positions itself in front of Gaza on Saturday near the southern Israeli kibuttz of Nahal Oz.
STORY HIGHLIGHTS
RELATED TOPICS

Jerusalem (CNN) -- One person was killed and at least 12 were injured Saturday when more than two dozen rockets fired by Gaza militants slammed into Israeli cites.

It's the latest in the ongoing tit-for-tat violence between Israel and militants over the past three days.

The fatality occurred in Beer Sheva, according to Eli Bin, an emergency official in the region. Four people were seriously injured and two suffered moderate wounds when rockets struck a house and car. An unknown number of trauma injuries were being transported to the hospital, Bin said.

Hamas militants in Gaza claimed responsibility for a volley of rockets that struck Ofakim, 25 kilometers west of Beer Sheva.

Two children and a man were injured when one of the rockets directly hit a building, Bin said.

Earlier in the day, Hamas announced it was ending a two-year truce with Israel.

"There is no truce with the Israeli occupation under the continuation of committing massacres against the Palestinian people without justification," according to the statement from the Izzedine al Qassam Brigades, which was broadcast on a Hamas-run radio station. "We call for groups to join in calling against the crimes of the Israeli occupation."

The latest violence began Thursday with a string of deadly terror attacks against Israeli civilians and soldiers and was followed by Israeli strikes in Gaza.

Israel said Saturday that its airstrikes are "in response to the terror attacks executed in the proximity of Eilat on Thursday, and the rockets fired from Gaza at Israel since."

"The IDF holds the Hamas terrorist organization solely responsible for any terrorist activity emanating from the Gaza Strip," the Israeli statement said.

The series of attacks and airstrikes have increased tensions in the region, and comes just a month before the Palestinians plan to make a bid for statehood in the United Nations.

Israel believes the attacks had their roots in Gaza, but were coming out of the neighboring Egyptian region of Sinai. Egypt denies the allegation, saying it has been cracking down on terror groups in its portion of the Sinai.

The Popular Resistance Committees in Gaza, whose leaders were targeted in Israel's initial airstrike Thursday, and Hamas have denied involvement in the recent attacks on Israel. Hamas has said Israel was looking for a pretext to attack Gaza.

Hamas is listed as a terrorist organization by the United States and the European Union.

Three men were injured in the attack on Ashdod, which occurred about 6 a.m., said Israeli police spokeswoman Luba Samri. She said the men who were injured were Palestinian laborers illegally working in Israel.

Overnight, the Israel Defense Forces targeted what it said were two tunnels it saw used by militants in Gaza to launch attacks against Israeli civilians and soldiers, the IDF statement said.

The IDF also said it struck a weapons storage facility in southern Gaza and another militant site.

Israel seized the Gaza Strip, the West Bank and other territory during the 1967 Six-Day War.

President Barack Obama earlier this year called on negotiations between Israel and the Palestinians to be based on border demarcations pre-dating the 1967 war.

On Saturday, the Mideast Quartet -- the United States, the United Nations, the European Union, and Russia -- issued a statement voicing its concerns over "the unsustainable situation in Gaza as well as the risk of escalation" and the group of negotiators "calls for restraint from all sides."