2 rockets land in Israel despite truce 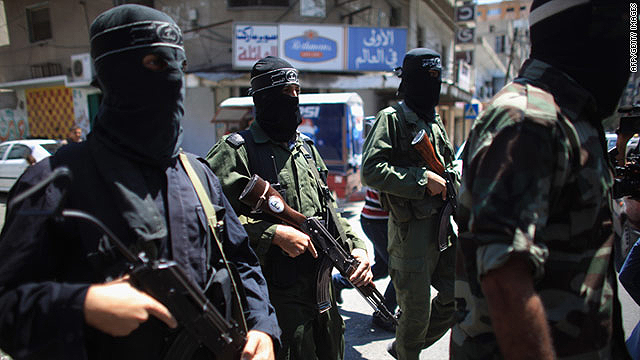 Militants from the Popular Resistance Committee announce a temporary halt to rocket fire into Israel on August 22 in Gaza City.
STORY HIGHLIGHTS

Jerusalem (CNN) -- A tentative cease-fire between the different militant factions in Gaza and Israel remained in place Monday, though two rockets fired from Gaza exploded in southern Israel on Monday evening.

No casualties were reported after the rockets exploded south of the city of Ashkelon, an Israeli police spokesman said.

The rocket fire happened despite a truce between various militant factions in Gaza and Israel.

A Hamas official said Sunday that the different factions had agreed to join a truce which, according to them, went into effect on Sunday at 9 p.m. local time. The Popular Resistance Committee, which refused to join the cease-fire Sunday, said in a news conference on Monday that "they have agreed to a temporary cease-fire for the sake of our people".

Since 9 p.m. hours on Sunday around 14 rockets were fired from Gaza into Israel, the last one landing at 8 a.m., according to the Israel Defense Forces. As of 8 a.m. local time the Israeli military reports no rockets .

The last Israeli airstrike in Gaza was on Sunday night when the IDF targeted a rocket launching device.

The Israeli prime minister would not comment on a cease-fire understanding but spokesman Mark Regev told CNN on Sunday that Israel's military actions would be preventative and would be pinpointed to stop the firing of rockets.

The latest flareup between Israel and Gaza came following a terror attack carried out by Palestinian militants on Thursday near the southern city of Eilat which killed eight Israelis. Another Israeli was killed by a rocket attack near the city of Beer Sheva in southern Israel.

Palestinian medical sources report that 15 people were killed as a result of the Israeli airstrikes most of them militants, among the dead were also three children. The IDF announced that seven militants who carried out the attack were also killed in clashes with the IDF.

The International community expressed concern over the latest round of violence.

The U.N. Special Coordinator for the Middle East Peace Process, Richard Serry, issued a statement on Sunday saying he "remains worried about the continuing tensions in particular the escalation of violence in Gaza and Southern Israel." He called for a return to full calm and said "the United Nations is actively engaged and supporting Egypt's important efforts in this regard," a reference to Egypt's attempt to gain better control over the Sinai which borders southern Israel.