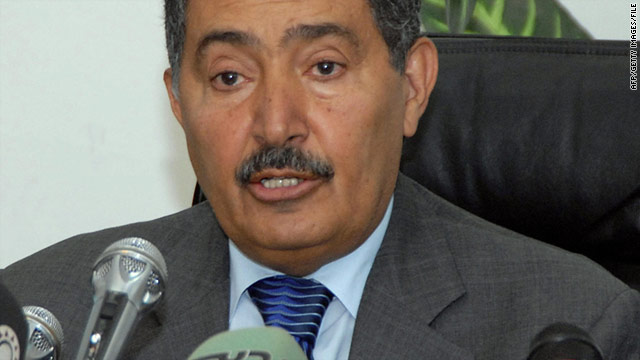 Sanaa, Yemen (CNN) -- The third most powerful political figure in the Yemeni government has died from wounds he received in the presidential palace attack in Sanaa last June.

Yemen State TV announced the death in Riyadh, Saudi Arabia, of Abdul Aziz Abdul Ghani, the president of the Shura Council, and announced the start of a three-day mourning period. Along with President Ali Abdullah Saleh, he had been receiving treatment in Saudi Arabia since June 3.

Ghani is the second senior official to be reported dead from the palace bombing.

Ghani was known to be one of the few officials Saleh trusted, and he stood beside Saleh for more than three decades. He took the post of prime minister in 1975, three years before Saleh became president.

Government spokesman Abdu Ganadi said that Yemen lost a leader who served his country for more than five decades.

"He is a victim of a terror attack. Yemen lost a leader and the government holds the Ahmar family responsible for his death. The palace attack was planned by the terrorist Ahmar family," Ganadi said.

He was referring to the family of Sadeq al-Ahmar, the leader of Hamil al-Ahmar, a Hashed tribal confederation. Hours after the attack, Yemeni security forces pounded al-Ahmar's home, killing 10 people and wounding 35, because they blamed his followers, a Hamil al-Ahmar official said.

Ghani's death came as hundreds of security forces were deployed to the streets of the capital, Sanaa, amid fears that the imminent toppling of the regime in Libya could have an effect on Yemen.

Tens of thousands of youth protesters marched in the streets of main cities celebrating the success of a third revolution of the Arab world in 2011.

"Yemen will follow the path of Libya, Egypt, and Tunisia. It is only a matter of time until the Saleh regime faces the same fate," said Khaled Anesi, a leader in the Yemen Revolution Youth Council.

Anti-government protests continued on Monday in 15 of Yemen's 18 provinces.

Opposition parties are giving youth extra dose of courage and hope, vowing that they will not give in until Saleh meets the fate of other fallen rulers.

Mohammed Qahtan, the spokesman for the opposition Joint Meeting Parties, said that what happened in Libya is a brief showcase of what will soon follow in Sanaa.

He said that the Yemeni people will have their goals met within days and the revolution will prosper.

"The ruling family has not learned its lesson from Libya and insists on using force against its own people," Qahtan said. "The will of the people is stronger than any ruler or dictator."