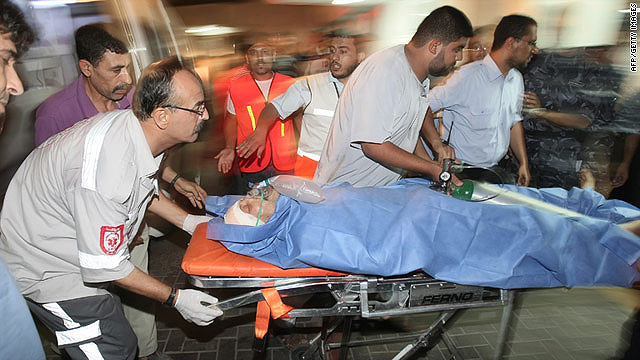 On Wednesday, an air strike on a tunnel between Rafa and Egypt left three people seriously wounded, the sources said.

The Israel Defense Forces said that an Israeli warplane hit an Islamic Jihad militant from the city of Rafa who was involved in smuggling weapons "and sought the execution of terrorist activity in Sinai."

The victim had operated with Gaza elements who had recently tried to carry out an attack in Sinai, on Israel's border with Egypt, it added.

Hamas security and medical sources reported a strike in Rafa in which one man was killed and three others were wounded, two of them critically, when their Jeep was struck.

The four men were members of Islamic Jihad, sources with the Palestinian militant group said.

In response, Islamic Jihad said Wednesday night that its members had fired about 10 rockets from Gaza into southern Israel. There was no immediate report of casualties.

The IDF said in a news release that it fired Wednesday night at a "terrorist squad" that had fired rockets into southern Israel. "A hit was confirmed," it said.

On Wednesday morning, the IDF reported that two people who had fired rockets at Israel from separate locations in northern Gaza were hit moments afterward by an Israeli aircraft.

The flare-up between Israel and Palestinians in Gaza came following an attack carried out by Palestinian militants last Thursday near the southern city of Eilat, which killed eight Israelis. Another Israeli was killed by a rocket attack near the city of Beer Sheva in southern Israel.

"The IDF will not tolerate any attempt to harm Israeli civilians and IDF soldiers, and will respond with determination to any attempt to use terror against the State of Israel," the IDF news release said.

The U.N. special coordinator for the Middle East peace process, Richard Serry, issued a statement Sunday saying he "remains worried about the continuing tensions in particular the escalation of violence in Gaza and Southern Israel." He called for a return to calm and said "the United Nations is actively engaged and supporting Egypt's important efforts in this regard," a reference to Egypt's attempt to better control the Sinai.