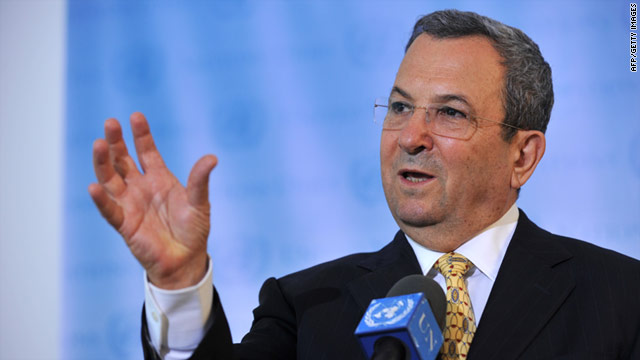 Jerusalem (CNN) -- Israeli Defense Minister Ehud Barak said Thursday that Israel's military will continue to hit Palestinians suspected of attacking Israel, amid escalating violence in the region since a deadly terror attack on Israelis a week ago.

Meanwhile, more than 140 rockets and mortars have been fired into Israeli territory from Gaza since last Thursday, a spokesman for the Israel Defense Forces told CNN Thursday, eight of them in the past 24 hours.

In the latest incidents, an Israeli airstrike killed two men in Gaza Thursday evening, while a mortar attack knocked out power at a border crossing into Israel, Israeli military officials and Palestinian security sources reported.

In an interview for CNN in Jerusalem, Barak said the recent violence had been triggered by the terror attack August 18 by Palestinian militants near the southern city of Eilat, which killed eight Israelis. Another Israeli was killed by a rocket attack near the city of Beer Sheva in southern Israel.

Most of those responsible for the attacks had been swiftly found and killed by Israel, Barak said, some near the scene of the attack near Eilat and others in Gaza.

"I'm extremely satisfied by this achievement," he said, because it signals "that we mean business and we are not going to accept the massacre of our civilians on the roads."

Asked if Israel and the Palestinians were entering a new period of dangerous hostilities, Barak said he hoped not -- but that he couldn't promise it.

The International community has expressed concern over the latest round of violence, which has come despite a purported truce agreed between Israel and Palestinian militant groups during the weekend.

Barak said Israel believes Bedouins with Egyptian citizenship had probably been involved in the attack near Eilat, but he did not know for sure.

Israel is not able to share all its intelligence with the public, he said, as that would help members of terror groups "not to fall into our cross hairs."

Barak reiterated Israel's expression of "regret" over the deaths of Egyptian soldiers in its Sinai region, which borders Israel, last week.

Egypt condemned Israel's action as "indiscriminate shelling." Barak has promised Israel will conduct a military investigation, followed by a joint examination with the Egyptian military, of the incident.

Asked about Israel's relationship with Turkey, Barak said his country has to consider issuing an apology to Turkey over the deaths of activists on board a Turkish ship bound for Gaza last year.

Barak said the operation had been justified but that questions had been raised over its execution by the Israeli military.

Turkey has demanded an apology from Israel.

Relations between the two nations reached rock bottom after the incident last summer, in which nine activists on board the Mavi Marmara, a Turkish ship filled with aid and 700 activists from various countries, died in clashes with Israeli Navy commandos while attempting to break Israel's blockade of Gaza.

Barak said Turkey is "an extremely important country in the region" and it would serve both countries' interests to reach an understanding. Turkey has "a major role to play" in maintaining the stability of the Middle East, he said.

Both countries are awaiting a United Nations report into the 2010 flotilla incident.

On the subject of Syria, Barak said he is fully behind the call by the United States and several European allies for leader Bashar al-Assad to step down.

"He has clearly lost legitimacy with his own people. I believe he is doomed. He will probably stay there for another three or six months, but he is doomed," he said.

Barak said he would like to see a similar international approach to Syria as has been taken with Libya. "We need much tighter international pressure there," he said.

With regard to the Palestinian Authority's plans to make a bid for statehood in the United Nations next month, Barak said he believes the move serves the interests of neither Israel nor the Palestinians.

Fnding a way to continue negotiations would be the best way forward, he said.

CNN's Kevin Flower and Guy Azriel contributed to a report.