35 killed in series of attacks across Iraq, officials say 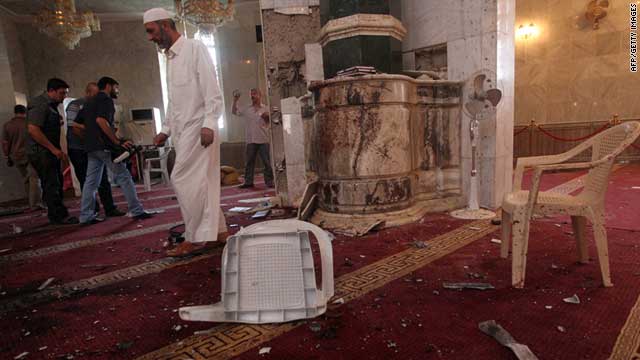 At least 28 people were killed in a suicide bombing attack in a Sunni mosque in the Ghazaliya neighborhood in western Baghdad late Sunday, an Interior Ministry official said. At least 37 others were wounded in the attack. A Sunni member of Parliament, Khalid al-Fahdawi, was among the dead.

In Tarmiyah, about 40 kilometers north of Baghdad, two people were killed and five were wounded after a bomb exploded near a Sunni mosque as worshippers finished up a nightly prayer for the celebrations of Ramadan, an Interior Ministry spokesman said.

Also, on the highway that connects Mosul to Syria, a roadside bomb exploded on an Iraqi army convoy, leaving two wounded.

In a separate incident, one man was killed after being attacked by gunmen. Two people were killed in Fallujah, officials said.

Some of the attacks appeared to target policemen, the spokesman said.

According to intelligence analysts with SITE, the al Qaeda-affiliated Islamic State of Iraq (ISI) vowed to step up attacks in the country to avenge the death of Osama bin Laden.

In a jihadist forum intercepted by intelligence officials on August 19, ISI leaders said they would conduct several phases of its "Plan of the Good Harvest" campaign, SITE reported, one of which would take place during the holy month of Ramadan.

However, previous attacks against Sunnis have been associated with Shiite militias, Iraqi analysts say.