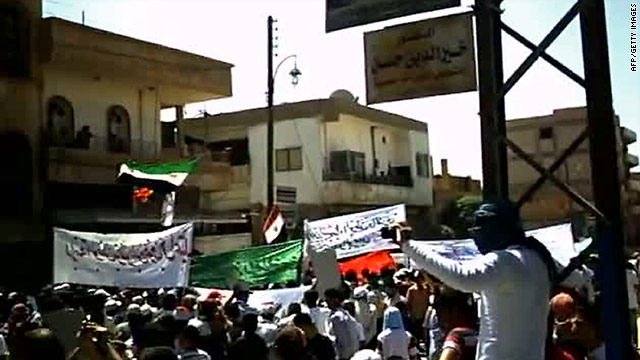 The new laws would prohibit publication of a range of content and would hold editors, journalists and even media spokespeople accountable for violations.

The legislation states that editors-in-chief, journalists and even "the spokesman at a media outlet" can be held accountable for actions that constitute a violation of the law. It also establishes an independent panel to regulate the "information sector."

A statement on the changes cites the need to balance "freedom of expression" with "responsibility and awareness."

The Syrian Observatory for Human Rights cites eyewitnesses in several cities, who claim that authorities are threatening the family members of wanted activists, holding them hostage and destroying homes.

The regime is forcing activists to turn themselves in by arresting members of the activists' families, including children and elderly people, the group says.

Authorities are also burning the homes of activists or their families if information is not forthcoming.

Additionally, the Syrian Observatory for Human Rights says authorities are warehousing arrestees in former Baath party youth camps. These camps do not have the health care or hygiene facilities to accommodate the large number of people detained. Witnesses say detainees are being given only one inadequate meal a day.

The group also accuses Syrian authorities of violating both Christian and Muslim places of worship, as well as arresting doctors and burning pharmacies.

Another opposition group said Sunday that continuing protests have led to more fatalities.

On Saturday, the Arab League Council called for restraint and an end to bloodshed in Syria in the midst of ongoing violence and unrest.

"The council expresses its concern about the deteriorating in Syria," the group said in a statement on its website.

Syria's regime has come under criticism and pressure for its harsh crackdown on demonstrators. World powers have called for Syrian President Bashar al-Assad to step down.

Last week, the U.N. High Commissioner for Human Rights said that more than 2,200 people have been killed in Syria since mid-March, with more than 350 people reportedly killed since the start of the Muslim holy month of Ramadan on August 1.