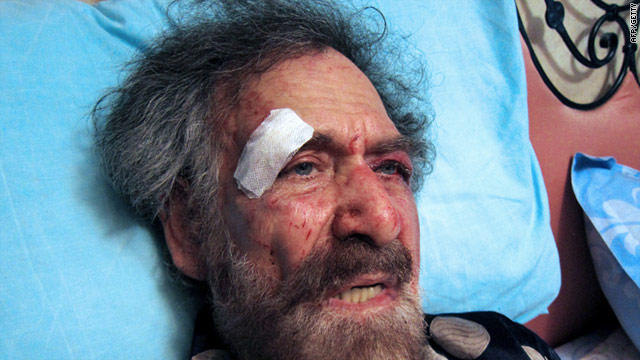 (CNN) -- Amnesty International released a report Wednesday documenting the deaths of at least 88 detainees in Syria during this year's uprising against the government, including many who were apparently tortured.

At least 52 of the victims' bodies showed evidence of torture, the human rights group said.

"Injuries on many of the victims' corpses indicate that they may have suffered horrendous beatings and other abuses," Amnesty said. "Signs indicating torture include burns, blunt force injuries, whipping marks and slashes."

All the victims were male, with some as young as 13, the group said.

"The accounts of torture we have received are horrific," said Neil Sammonds, Amnesty's Syria researcher. "We believe the Syrian government to be systematically persecuting its own people on a vast scale."

Syrian government officials could not immediately be reached for comment on the allegations.

Speaking to French diplomats in Paris, Sarkozy pledged that France and its allies will do everything legally possible to help the Syrian people achieve freedom and democracy.

No break in Syrian crackdown

Meanwhile, live video said to be from Sahel al-Ghab in the Hama area showed large crowds of anti-government demonstrators singing and waving banners as they marched Wednesday.

More live footage, purportedly from the Daraa area, showed similar scenes, with protesters repeatedly chanting: "Long live Syria, Bashar al-Assad is going down. We don't like you, leave us."

Amnesty said its report was based on interviews with witnesses who have fled Syria, communications with people still in the country -- including relatives of victims and newly released detainees -- and analysis of video footage relating to 45 of the cases.

Twenty of these clips, filmed by relatives, human rights activists and others, and a photograph were submitted to independent forensic pathologists "to seek their expert comment on the injuries visible and their possible origin and impact and to suggest possible causes of death, where feasible," Amnesty said.

"Such assessments based on film evidence rather than firsthand examination must inevitably be treated with a degree of caution but they are striking nonetheless in the way that they point to a pattern of systematic gross abuse which is consistent with other evidence that Amnesty International has received from a diverse array of sources," the report says.

Amnesty has not been allowed into Syria to conduct on-the-ground research since June last year, the report notes.

Other agencies have also issued reports of human rights abuses, including the United Nations.

The U.N. reported earlier more than 2,200 people had been killed in Syria since February, with more than 350 people killed since security forces stepped up their operations against demonstrators during the Muslim holy month of Ramadan.

One particularly gruesome finding in the Amnesty International report was that at least three of the victims showed signs of genital mutilation while in state custody.

Al-Assad's government has rejected accusations of widespread human rights abuses, instead accusing foreign governments and "enemies of Syria" of carrying out a campaign to undermine the authority of the regime.

The government maintains it is pursuing armed terrorists and foreign agents whom it accuses of trying to destabilize the country.

State television has also periodically broadcast interviews with men who confess on camera to carrying out acts of terrorism and violence against the government.

Amid daily reports of anti-government protests, arrests and killings of demonstrators by Syrian security forces, Washington has imposed sanctions against several officials in the al-Assad regime.

The move freezes any assets they may have in the United States and bars U.S. citizens from doing business with them.

Earlier, Washington imposed similar sanctions against the Syrian government as well as an embargo on Syrian oil exports.

This week, a spokeswoman for the European Union's foreign policy chief said a similar oil embargo was in the works in Brussels.

"Preparations for oil embargo are being finalized and it's a matter of days for final adoption," EU press officer Maja Kocijancic told CNN in an e-mail.