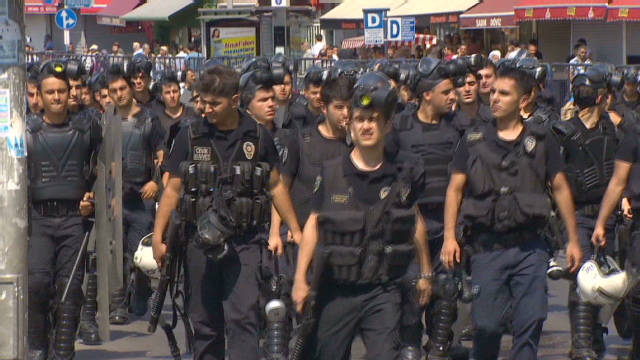 Istanbul (CNN) -- Mounting tensions between the government and members of Turkey's Kurdish ethnic minority erupted on the streets of the country's largest city Thursday, after Kurdish activists clashed with riot police at a protest organized by the main Kurdish nationalist political party.

Scores of Kurdish youths, many of them covering their face with bandannas, hurled stones and petrol bombs as security forces fired tear gas to try to disperse the crowds in Istanbul.

Amid the chaos near the banks of the Marmara Sea, a CNN producer witnessed a man collapse, apparently overwhelmed by the clouds of noxious tear gas. Nearby, flowers littered the pavement where a women's flower stand had been overturned.

But the rallies come within weeks of a fresh Turkish military bombing campaign of Kurdish separatist rebels who have long operated out of camps and bases across the border in Northern Iraq.

Tensions escalated after a BDP official, Yildirim Ayhan, was killed Sunday during clashes with security forces on the Turkish side of the border. Ayhan was reportedly part of a group of Kurdish activists marching toward Iraq to serve as human shields against the Turkish aerial and artillery bombardment.

The protest in Istanbul Thursday began fairly peacefully. Women in traditional Kurdish costumes led a column of thousands of people, many of them waving BDP flags and carrying banners that said "peace now immediately" and "long live the brotherhood of people." 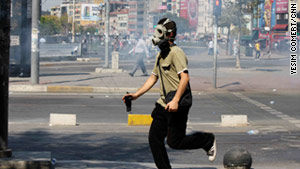 Turkish police use tear gas to disperse the crowd in Istanbul as some Kurdish protesters throw stones and petrol bombs on Thursday.

Since 1984, fighters from the Kurdistan Workers Party, or PKK, have waged a bloody guerrilla war against the Turkish state that has claimed more than 30,000 lives.

For decades, Kurds were the target of repressive government policies, implemented by officials who sometimes referred to members of Turkey's largest ethnic minority as "mountain Turks." Until just a few years ago, it was illegal to speak Kurdish on radio and television in Turkey. The government of prime minister Recep Tayyip Erdogan has tried to improve relations by launching a state Kurdish language TV station in 2009.

Despite these steps, some of the demonstrators on Thursday chanted "Erdogan murderer" and chanted "Kurdistan will be the graveyard for fascism."

At one point in the march, BDP parliament member Sebahat Tuncel successfully negotiated with police officers who had objected to some of the political banners. The signs were taken down, and the march proceeded. But then CNN journalists witnessed dozens of young masked men emerge and begin hurling stones at bus stops.

Then chaos broke out.

At one point, CNN cameraman Joe Duran witnessed a mob of Kurdish activists viciously beating a man. Duran left the scene of the violence after members of the crowd turned on him and told him to turn off his camera.

A Turkish police commander told CNN there were approximately 3,000 protesters participating in the rally. The officer, who did not volunteer his name or rank, estimated only a minority of the demonstrators, some 150 people, participated in the violence.

But some Kurdish activists blamed the government for the clashes.

"Look, we are struggling for peace and Erdogan attacks us using tear gas," said Sabiha Sayan, a female demonstrator, dressed in the white hooded veil traditionally worn by many Kurdish women.

After a melee that lasted nearly two hours, demonstrators fled the scene. The ground was littered with shards glass from dozens of shattered bus stops and newspaper kiosques. Billboards advertising the face of Turkey's prime minister had been defaced with graphiti saying "the Arab Spring will come to Turkey and you will be on trial."

Commuters began gingerly stepping through debris and past overturned police barriers, some of them wincing at the tear gas still lingering in one of Istanbul's busiest transit hubs. A pair of tourists from Italy wandered through the gas-canister strewn square pulling their suitcases, looking in vain for a shuttlebus to the airport.

Other protests were scheduled to be held in other Turkish cities on Thursday, including the southeastern city of Diyarbakir, the unofficial capital of Turkey's Kurdish minority.