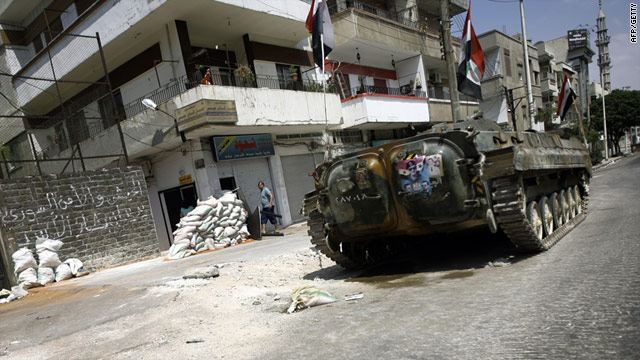 A Syrian military tank takes position in a residential street in Homs, on August 30.
STORY HIGHLIGHTS

(CNN) -- The European Union imposed a ban Friday on the import of Syrian oil, the latest diplomatic move against Bashar al-Assad's embattled regime.

"The prohibition concerns purchase, import and transport of oil and other petroleum products from Syria. No financial or insurance services may be provided for such transactions," the European Council said in a statement issued in Brussels, Belgium.

The action was expected. The EU has been a top market for Syrian oil, and the group said it intended to make the move which will have a detrimental impact on the Syrian government's oil revenues.

The organization also added four more Syrians and three entities to a list of those targeted by an asset freeze and a travel ban. But there is an exemption to the asset freeze for humanitarian purposes.

Syrian government caught in a lie

World powers have been bearing down on the al-Assad regime because of the government's ferocious crackdown against peaceful protesters for nearly six months.

SANA said "armed terrorist groups" killed the security forces in the Damascus and Homs countryside. The gunmen also died in those areas, it said.

The government says the armed groups are responsible for the bloodshed, while demonstrators blame the deaths on military and security forces.

CNN is not able to independently verify the accounts because of Syrian limitations on reporting.